A Need to Know 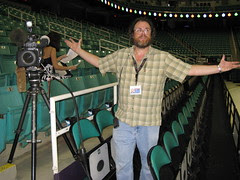 There is no ONE PATH to becoming a TV News Photog; no series of checklists, no governing body, no filigreed sheepskin proclaiming you Doctor of Cameraman Thropology. Sure, you can study broadcasting in college or send your checks to NPPA, but you’re not truly a photog until you’ve worn a groove in your right shoulder, backpedaled before shackled madmen or sat through a month’s worth of fruitless city council meetings. Yes, as a field of discipline it’s wonderfully disciplined, one of the few remaining professions through on the job training. I myself only began mastering the craft after failing at other professional endeavor, a career path I wouldn’t suggest to those fond of paying their bills on time. But lucky as I was to find my special purpose, I know that, compared to some, I’m barely a cameraman at all.

That’s because I don’t spend a lot of time thinking about the innards of my many gizmos. Yeah, I know which model of fancycam I drag across the Piedmont each day and I grasp the limitations of my wireless microphone, but I harbor no flowcharts in my pea sized brain and not once have I EVER referred to an audio cable as an X-L-R. There are those who do, of course, mostly freelancers who know more about their gear ’cause they’re the ones who bought it. Some station staffers can also be counted on to know every inch of their glass and plastic, but I think it’s safe to assume most photogs out there know a lot more about story execution than internal schematics. In my not so humble opinion, that’s as it should be, though there are legions of lenslingers who’d like to hang me by the tripod for peddling such heresy.

Take the crowd over at b-roll.net, the on-line watering hole for those of us with camera batteries on porta-bake. Smart folks, they are: from the newsroom neophyte to the terminal burnout to the sore shouldered sage - each group slathers passion and piss over a living compendium of issues and opinions. This latest conundrum should be a fun one, but already gifted lensers are getting their panties in a wad because someone or another told them the world was not as they see it. It’s kind of pathetic really, like watching buggy-whip makers argue over who sports the best leather while Henry Ford rolls new Model T’s off assembly lines in the background. But I didn’t log in to denigrate the b-roll army. I just wanted to move that latest mullet photo a little lower down the page. But while I’m at it…

I DO think it’s important for anyone with a lens in their life to understand all that it will do. That said, I’m not sure what good it does to spout serial numbers by heart- unless you‘re trying out for the role of C3-PO in your community theater. I’d much rather you know how to work a room full of pissed off officials, how to pretend you’re not shooting when you are, how to tell the suits your mast won’t stay up when thunder falls on your live truck. Master that and you’ll be in demand long after the techno-tog has fallen out of fashion, for the era of the specialist is coming to a close. I’m not saying it’s right, but fancycams are about to come with candy-colored buttons. If you thought the rise of video over film dumbed down the craft, you ain’t seen nothin’ yet.

Now move out of the way, would ya? I want to point this shiny thing on my shoulder at that bent sheet metal over there...
Posted by Lenslinger at 10:40 PM