Fool by the Pool 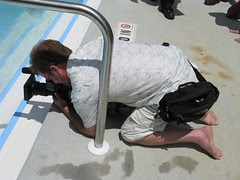 So the local water park blew some coin on a sick new ride and the suits in the room thought it might look good on television. Clearly, this is a job for Lenslinger. Actually, Weaver was scheduled to unveil Wet and Wild's new pitch-black plummet, but a whiff of aviation fuel lured him to the hills of Wilkes County - where, being Weaver, he conjured up a manhunt. All of which goes to explain why Nicole Ferguson I spent the morning of the Photog Equinox poolside, as two members of the park's management team hurled themselves into a watery void. It's a living. 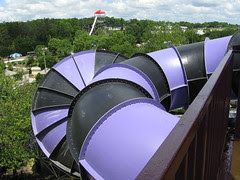 Doctor Von Dark's Tunnel of Terror. THAT'S what they named the damn thing. Guess Captain Flatulence's Angry Intestine was taken, probably by some water park up in Flushings. Heh-heh, Flushings. Actually, Lawn GUY-land is the only other place you'll find a similar structure - a contorted stack of tubes featuring a forty foot drop in complete darkness. Think of it as Paul Bunyan's turlet tank! Or don't. It's not like I ain't gonna push you down a pipe just for being disagreeable. 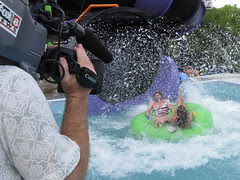 Not when I have such willing victims as Kathy and Kerry. Officially, they're part of Wet and Wild's crack sales force, but a clause in their contracts allows them to act as turds in the punchbowl whenever a news crew comes a callin'. Around here that's pretty often, as W&W is known far and wide for its ample camera fodder. Don't believe me? Drag a fancycam past the Lazee River one summer day. You'll see more farmer's tans, open beer guts and leaky Speedos than can be found in a fortnight at Myrtle Beach. And that's saying something... 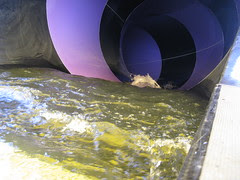 Today however, the Carolina's largest water park was damn near empty, mostly because it's yet to open for the season. Only plumbing ninjas and landscapers roamed about, punctuated by a small legion of teenage lifeguards twirling whistles this way and that. I suppose they're training for when little Pugslie gets stuck in the drain at the bottom of the wave pool. That, or the food court fry cook runs out of chicken nuggets and bands of adolescents stage an insurrection outside Pirate's Cove. Maybe they should give those lifeguards tasers, too. 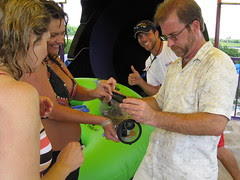 Speaking of weapons, I rolled up with a few of my own. In addition to my fancyam, sidearm digital and rainbow collection of half-dead batteries, I brought the station's camcorder and underwater housing. It's not the kind of thing I normally eff with, but knowing Weaver would have arrived in full scuba gear, I opted to engorge my own McGyver. It's not exactly my wheelhouse, but rough waters call for extra vigilance. Besides, what's more comforting than twisting a ziplock bag around a handycam you don't own and handing it to a total stranger in a bikini. All I asked is she not pop out the other end of the tube withOUT my camera and its condom. 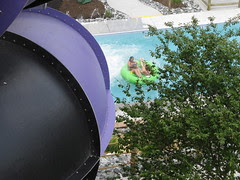 She didn't. In fact, we may have awakened the inner cinematographer in our waterpark mouthpiece, for Kathy and Kerry giggled a bit harder each time we sent them down the drink with contraption in hand. I only wish I'd thought to make sure the damn thing was zoomed OUT, for undefined frames of bubbles and swish do but so much for a finished piece. In the end, we got some decent footage, but considering the word DARK is in the ride's name, we didn't rewrite any new paradigms. Only Nicole distinguished herself with a lens, popping off these shots while managing not to drop the camera or her Crackberry in the Urination Station kiddie pool.

All that and looks too.
Posted by Lenslinger at 9:46 PM

I started to say, "I'd slide the tube of flatulence any day," but then thought better of it. :-) Love reading you... as always!
(Varner)

Slinger that was great. I wonder if talk my government into getting one around our capital building.

the scenery at that place makes my eyes bleed.

What ride? All I saw were the twins.