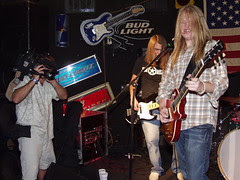 Hoping to make up for all that American Idol pap I’ve foisted on the masses, I’ve hooked up with some teenage musicians whose sheer volume would make Simon Cowell shoot Coke out his nose. But these cats aren’t the least bit concerned about prissy Brits in glittery t-shirts; they’re too busy melting the stage at the local biker rendering it to cinders with their throwback assault on Classic Rawk. Having waded through tens of thousand of scittering young crooners in full body glitter, it’s refreshing to witness three sixteen year olds lay down some Foghat. It’s been a fun, sweaty, ear-bleeding gig and I’m only halfway through!

It’s also a return to my own roots.

See, back in the day I considered myself quite the music video director, an acid-washed clad figure skulking the lip of some local stage in a hand-held hunt for bass runs, bombast and backlight. Yeah, between all the snap-zoom drum solos and drunken fan pandemonium, I lived a thousand nights as the resident mosh-pit auteur of a small Southern college town. As a result, I was the grizzled helmsman of a half dozen really crappy music videos - long before I ever slung my first lens at a county commissioner meeting. Good. Times. But enough of my flashbacks, let’s meet the band!

It's believed this little combo has a bright future. I'm hear to report they're having one hell of a 'right now'. If I were that cool at sixteen, I'd be phoning this in from my invisible jet. More on that later, for now just know my small involvement in their rise has been no less than serendipitous. It’s reminded me how potent live music can be, how happy accidents abound once the spotlights get going and how imperative it is to edit on the beat. That’s strong medicine for a segue purveyor like me - and it’s why I threw in with them in the first place. So while I beg my bosses for a day to put this metal epic together, know there’s some crashing drums, throbbing guitar and careening camerawork heading your way, courtesy of a preternatural power trio and middle-aged lenslinger who used to have a few rock and roll dreams of his own.

Party on, Garth…
Posted by Lenslinger at 9:02 AM

congratulations on your recent coup in the 2008 Blog Awards. Stop by my website to claim your cartoon picture of a cubic zirconia statuet.

I didn't know anyone under the age of 25 even KNEW of music like that!

we need to re-grow our mullets and go on tour.