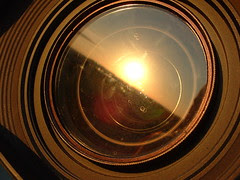 Some TV News people live to prick the afflicted and afflict the prickish. Others simply have a technology fetish. Me, I’m in for the entrée; that languid ability to wander into others lives at key moments and retreat with their perspectives. It’s not a particularly admirable trait, but who gets to pre-order their DNA, anyway? Back in elementary school I was the kid with the Coke bottle glasses and the Steve Martin comedy albums committed to memory. I’d sink in my seat when talk of recess filled the chalky air, but mention the film projector more than once and I’d have that puppy field-stripped and threaded before you could hit the light switch. While the other kids farted, napped or flirted, I sat enraptured by the way the flickering light cast twenty year old reality on the wall. It did not score me a lot of chicks. Nor did I make it with the ladies when the only tenth grade class I regularly attended was Journalism. Being one of the few boys present, someone jammed a camera in my hand and proclaimed me Yearbook photographer. The title pleased me, for not only could I explore my interest in the frozen frame, I could scam my way out of most classes with claims of meeting the Golf Club for an important photo spread. Had I been able to see into the future, I might have put down the lens and picked up the Nine Iron. Were it not for my lack of athleticism, I might have been a pro golfer - or at least one of those manicured ass-hats I see preening on the greens every weekend.

But this ain’t about golf (of which I still know nothing). No, it’s about a search for meaning in business that pursues tragedy and pablum with equal fervor. I’ve all but abandoned my quest. No longer do I look for clarity in car wrecks, I don’t seek epiphanies in ribbon cuttings and what others find scintillating washes over me like so much white noise. Yet, I’m still etching notches in my tripod’s one good leg, still scribbling details in tattered notebooks, still twisting little vignettes into existence and forgetting their details before they even air. New neighbors assume I’m up on every pixilated tidbit; they don’t believe me when I tell them I don’t watch the news. But watch it I don’t; for I feel if that if I did, my skull would implode. Instead I sit here into the wee hours of the evening, back turned to a darkened HD set as I hammer away at this coffee-stained keyboard, railing away night after night at the inconsequence of it all. I don’t remember what I thought a life behind the lens would bring me but I thought it would make me wise. Instead it has made me weary.

Weary as I am however, I plan to soldier on. Like a veteran street cop who grimaces at the sound of breaking glass, I no longer yearn to chase bent sheet metal, I no longer want to witness every instance of county commissioner insanity, I could live out the rest of my days without babysitting another stand-off. But I do so dig the unfettered view, my now lifelong habit of taking in life’s pageantry through a glass-filled tube feels as natural as the summer humidity that wilts everything in sight these days. I’m like a junkie who’s tolerance for his drug of choice has robbed the once delicious buzz of exotic qualities. Maybe that will explain why I can look so damn bored at the latest flaming imbroglio. It’s not that I don’t care; I’ve just gotten used to not really having to. No one expects a TV news photog to have an opinion, let alone a vocabulary. It’s the kind of cameramanonymity I used to cultivate, for nothing gets you into and out of a tricky situation than appearing as if you think in half-formed grunts. But You Know, generous visitor - there is more behind my viewfinder than a guy with logos on his soul. Just keep it to yourself - would ya? I’ve got a lack of reputation to protect.
Posted by Lenslinger at 9:17 AM

and amen to that brother! 17 years in the biz the last 11 in Kansas City,MO

my now lifelong habit of taking in life’s pageantry through a glass-filled tube feels as natural as the summer humidity that wilts everything in sight these days. I’m like a junkie who’s tolerance for his drug of choice has robbed the once delicious buzz of exotic qualities.

what prose! you just woke my lazy ass up. i gotta get to hammerin on the keys, myself.

You hit the nail on the head 'slinger...been feeling kinda the same way myself...i love this stuff (mostly) but hate it (sometimes). I've been in 16 yrs now. Sometimes it fells like I'm the one watching TV; not making it. Plus, have that many people been staring at me as much as they used to?

It must be that time of year. I hadn't read your blog for a while, and I made a post on mine Sunday about 'burn out.' *grunt* You words pretty. *grunt*