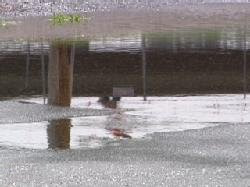 So, when's a stretch of wet pavement worthy of the EXCLUSIVE treatment? When it's the one thing standing between you and your evening commute. Hey, I'm all for breaking new ground - but if interviewing a phone pole is what it's gonna take to get me home, I'll find a tall, chatty one. Then I'd ask him what kind of tree he'd be - but that's really not important right now. What is important is that you grasp both the fervor and the insouciance I use when clamoring at the banks of such a body of water as this. I have seen the future of my afternoon and a river of dishwater runs through it. Luckily I'm wearing mental hipwaders and waded in like a fly fisherman jacked-up on campfire coffee. I'd already bagged a couple of shots when the tiny speaker jammed in my ear exploded with overmodulated Chad:

My mouth contorted in a mask of pain, I lunged for the camera's volume switch and cranked it counterclockwise. When the sound receded I scanned the area for the source of the noise. Spotting Chad half a block away, I zoomed in my partner for the day as he tried to pin a microphone one a young mother he'd discovered playing with her kids nearby. I was about to join them when the woman's posture told me not to. A second later my suspicions were confirmed as the mother begged of from commenting on camera - something about not having 'her hair did'. Chad thanked her and continued his search for a (hopefully) outraged neighbor. A few minutes later he found a gentleman who was more than willing to ask my camera rhetorical questions. "Why's the city let a broken valve flood the street when we's under water rstrictions?" Not knowing the answer, we simply nodded, grateful the man was posing queries we could not. After one final question ("When's this gonna be on?"), we bid our guest adieu and repaired to the shore of the still bubbling brook.

There we got to work: shooting close-ups, wide shots and an on-camera segment in which Chad dramatically tapped the water with his foot. All the while his cell phone rang incessantly as city officials took turns dodging our questions. This of course distinguishes our assignments from few others, for we typically pace about the edges of controversy while playing phonetag with unseen executive types. No, the only thing that made the shimmering rivulets of taxpayer water the least bit unusual was the insufferable humidity that cloaked everything in sight. Actually that's not unusual at all; Carolina weather's a ball-dissolver this time of year - whether you're covering a drive-by homicide or an barely gushing manhole cover. So while rivulets of my own soaked every inch of fabric I was wearing, I tried to blink away scenes from Cool Hand Luke while beging Chad not to make me 'spend a night in the box'. This only confused my partner, but he took my delerium as a sign it was time to go. So we did, only to return in a live truck four hours later to find our little leak had been repaired. Still we carried on with our live remote, confident that no matter how fleeting the dried-up controversy may have been, for one brief, sticky and inconsequential moment, we OWNED that mud puddle...

And you thought my work wasn't rewarding.
Posted by Lenslinger at 10:19 PM