Yawning at the Renaissance 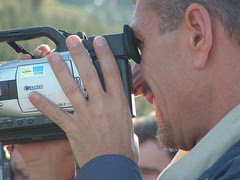 With newspapers rotting unread in our nation’s driveways, legions of print people are taking up the videocamera. But it looks like a few of them are gonna drop the damn things, if they don’t stop wringing their hands over how NOT to be like TV. Oh, I get it. Newspaper folk have long held my kind in the lowest regard. Our winking hyperbole and flashing graphics and pretty figureheads offend their sensibilities. So they openly dismiss us as clowns with spray paint and wave off even our finest efforts as graffiti that‘s beneath them. Now, however - their tune has changed slightly. No longer able to merely marginalize my craft, they’re tricking out their brightest with slimmed-down gear while boasting how their new-age toys and old school intellect will soon render the old TV News breed obsolete. So, how’s that going for ya?

Certainly there are talented staffers doing exciting things with video. The newspaper industry’s many gifted photographers could bring a new dimension to moving pictures and feather their own threadbare nests in the process. But the ink-stained wretches seem to have a blot on their soul. They detest the trappings of television. Booming clichés and overexposed hosts run countercurrent to the type of thoughtful video analysis they wish to initiate. Some have already succeeded in their quest, but many more have simply replaced overly-punchy pacing and plastic voicework with meandering storylines and monotone narration. Not all of their end results will put you to sleep, but neither will it make you lean into your laptop in breathless anticipation of what will come next. You know, the way you feel when something really fascinating comes on TV. Oh that’s right - you don’t watch television. Y-e-a-h....

I don’t mean to denigrate ALL newspaper video folk - even if they do line up to disparage me. Angela Grant, Colin Mulvany and Cindy Green are just a few of the content producers that regularly put their mojo where their multimedia is. But countless others - especially the all-knowing pundits who rarely leave their desks - are so full of shit their eyes are brown. Their various sites tout video fundamentals as new truths they’ve just wrestled from the primordial news. Jump cuts, white-balancing, sequences - I never knew how misinformed I was until some dude in a sweater vest wrote six hundred words on a concept my ’tween daughter figured out ten minutes after powering up a Sony of her owny. Believe me, nobody wants a new video paradigm more than yours truly. TV News has long ago stagnated, it’s true. But until the pointy-headed set unveils this new passel of tactics, their line claims of superiority will continue to read like the deathbead delusions of a once vibrant industry.

So please, prove me wrong. Until then, put a sock in it, would ya? I’m trying to watch television...
Posted by Lenslinger at 11:10 PM

Damn are you ever the Emperor of word slinging. But please don't place me in either camp - I'm a FORMER broadcast shooter/current teacher/supporter of video for ALL (regardless of gear) on the Internet. I love the best of the old and new and wish the whining and posturing would go away and folks would just work. While we may be here to compete with each other, we should avoid sniping and belittling our comrades.

I don't like a lot of what TV News has become. You named a few things yourself -- plastic voiceovers and kitschy storytelling. I would also add stupid, sensational story ideas (dustbunnies on the playground, chupacabras in rural Texas, prehistoric flying bird terrorizing San Antonio).

Besides these things I really don't like, I do recognize other things that I think that newspaper video shooters should learn from and emulate. The things I think are valuable mainly come from TV photographers (not the reporters or anchors). I like the shooting and editing expertise that I see in TV news videos.

There are bad and good sides to everything.

Pick up what you like, leave behind what you hate.

Mr Slinger - or can I call you Lens?:

I agree with your complaints about the relentless barrage of training tips from folks who have barely unpacked their cameras.

- there are people who don't watch TV - I am one of them. Never touch the stuff - unless I'm travelling.

- the only real difference between TV video and the other sort is that TV news produces X minutes of video every day irrespective of whether there is anything worthwhile to film.

- newspapers seduced by the notion that video is just a way of wasting viewers' time between messages from sponsors, produce the same old twaddle with cheaper cameras and less talented operators. They are doomed.

As an avid reader of your blog and lifelong watcher of FOX 8 News, I read with relish your latest entry.

I am one of those ink-stained wretches you speak of, and to see the decline of newspapers is heartbreaking.

To see the decline of TEE VEE news is also heartbreaking.

I have picked up the video camera and attempted to imitate your craft -- to moderate success in terms of newspaper folk.

But I could never do what you do. After all, I have been writing for newspapers since I was 15 years old. And I will continue to write until the day I die.

But I remind you, good sir, that any picture you can make, I can write a thousand words about.

The real question: Will anyone see your picture or read my words?

That is the dilemma that faces our two respective industries.


Ben McNeely
Print Reporter and Fellow Wretch in the Trenches