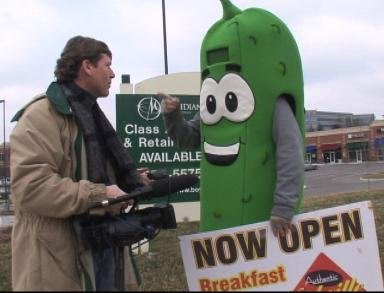 There’s an old maxim in journalism: Comfort the afflicted, hassle the cat in the cucumber suit. Okay, so that’s really more of a personal mantra, but the fact of the matter is I wasn’t born with this outlook. No, I learned it from a few key elders; masters of street corner cinema who took this bleary-eyed doofus and made a one-man-band out of him. Chief among those tutors was the great Andy Cordan, whose balls-out approach to newsgathering left deep imprints on my neophyte psyche. I never really considered A.C. a mentor until I took over the bureau job he vacated so many moons ago. What followed was a difficult time for your somewhat humble lenslinger who alienated Andy’s contacts by aping his every other move. Too bad I could never fully emulate his chutzpah. But then again, few could. I have a fond, distant memory of him shoving a lens in a freshly shackled bank robber’s face and ’suggesting’ he show more emotion. Good. Times. These days, Cordan’s still at it, exposing all That's Messed Up for the oft-maligned WKRN. Say what you will about theVJ schtick; nobody’s got the stones to pull it off like Andy ‘The Man’ Cordan, even when he’s simply - AHEM - jerkin' a gherkin.
Posted by Lenslinger at 12:35 AM

I can't help but wonder...what is he shooting that he has to hold the camera that low and at that angle.

Maybe I don't really want to know! Could there be another "pickle" just behind that sign?