Numb from the Scrum 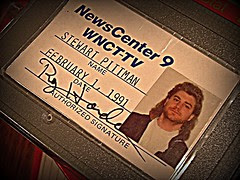 Thanks to a series of fresh press passes, my twenties were pretty intense. Since then, however, the sudden rush of understanding felt when golden shovels break topsoil has subsided a bit. Don't get me wrong. I still feel a thrill when the rent-a-cop wants to pat me down and loitering outside a burning meth-lab never does lose its buzz. But the less glamorous aspects of news-gathering haven't aged nearly as well. Neither, for that matter, have I. Back when I was a neophyte with good intentions and a wicked mullet, I tackled every assignment with hustle, gusto and a really rad jean jacket.

These days, I rarely ever go double-denim. But as my wardrobe has evolved, so too has my attitude. No longer do I volunteer for all-day stake-outs. Where as I used to fall in behind each and every passing siren, I usually now drop to the floor and hide under my desk. And that three part consumer investigative piece? I'd rather pretend I watched it than shoot a single miserable frame. How did I get to be this way? Overexposure to all manner of inanity, I think. Truth is, I don't really know. See, I was just a pup when I wandered off the street and into my very first newsroom. Thus, I can't tell if I'm half-bent and cynical because I've carried a camera everywhere I gone for more than two decades, or if it's the other way around. I don't suppose it even matters. One thing's for sure: I learned to work the knobs pretty quickly, but it's taken me years to gain even a little perspective.

What IS that perspective? Hard to say. All I know is twenty years behind the lens has left me half-convinced I've seen it all. No doubt that comes from repeating myself so many times over the years. Example: I've produced more 'Back to School Shopping' stories than I can shake a three-ring binder at. Somewhere at the North Carolina Zoo there's a cage with my name on it - not because I'm so damn furry but because I've showcased every species that place has to offer - including the veteran janitor dude who'd rather dry-scrape the monkey pit than clean up after one more third grader. I don't blame him, for that kind of time in office can only lead to scandal, graft or petulance. For we 'slinger types, a long career manifests itself in a kind of practiced aimlessness, an urgent insouciance, a feeling of being well connected yet utterly detached...

Now if you'll excuse me there's a drive-by shooting I gotta get to. Seems they're fresh out of knock-knock jokes and it's my turn to bring the fondue set...WHAT?!?
Posted by Lenslinger at 11:07 PM

You were a handsome dude back then and you even had your hair combed. I'm not used to seeing it anyway but mussed up, wind blown or with finger roads thru it. Since we have never met so all my images have come from this site. BB
Oh and by the way, it has not all been boredom because I remember your uddles going up a tad when a lion appeared to be coming awake on the vets table. :) BB