But That Trick Never Works... 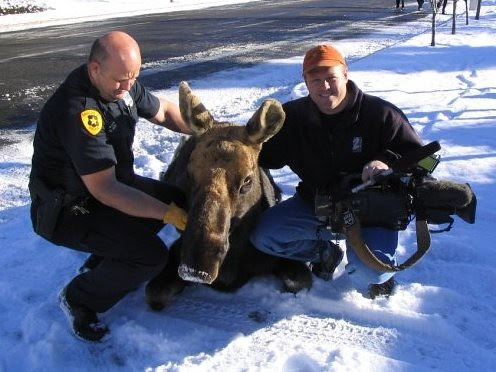 Hey, remember when the game warden popped that moose with the tranquilizer dart and we all took turns taking pictures with it? Yeah, neither do I - but when you run around with a camera in tow, vamping with some animal just goes with the territory. Don't believe me? You've never watched a volunteer fireman try to corral a runaway steer using nothing but a garden rake and his own beer gut. I have and I can tell you it is the kind of thing that sticks in your craw. In fact, the memory of that afternoon is something I plan to chew on long after I've traded in my own teeth for a pair of dentures, some high-waisted slacks and one of those fancy new iLid implants. While I'm at it, I'll probably cue up the time I dropped gallons of sweat over a 300 pound lion named 'Pacino' Did that really happen? By then I'll probably wonder but for now I can tell you the experience ranks right up there with feeding ostriches from the back of a pickup truck. For some forgotten reason, it seemed like news that day... And the moose? He wandered into Salt Lake City recently where officials promptly drugged him, called our friend Darren Bailey and put it all on the news...

Wait 'til Squirrel finds out...
Posted by Lenslinger at 7:09 AM