Ten years ago, a crack unit of camera commandos was sent to prison for a crime they did not commit. These men promptly escaped from a maximum security stockade to the local television underground. Today, still wanted by the government, they survive as 'slingers of fortune. If you have a problem, if no one else shows up, if you can help them find their focus, maybe you can hire... The A/V Team. 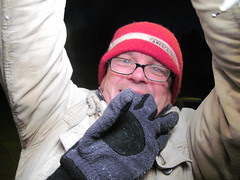 "The Chief" - Reportedly the group's leader, this alleged British expatriate hides behind affability and a pleasing accent. Do not be fooled. He's trained in the art of over-lighting, favors clean head-shots through distant doorways and once choked an intern with his own resumé tape. Not above using nonsensical foreign colloquialisms to impress the lay-dees, he indulges a four dollar a day ice cream habit. Thought to originally be from Iowa. 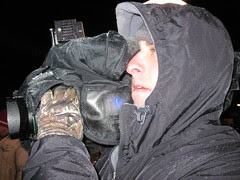 "Joe-Joe" - With his laid-back nature and total recall of Country Music Classics, this Tennessee native draws his victims in by posing as an easy going good ole boy. In fact, he's a video assassin, the group's hopped-up trigger man with legendary edit bay speed, deep knowledge of satellites and barely concealed survivalist leanings. Can kill a man with a single fishing lure or lone tripod screw. Personal friend of Bigfoot. 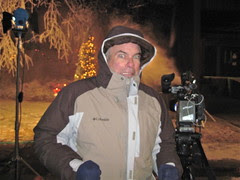 "Puppet Master" - This shadowy figure has been on the agency's radar for decades, as he's been skirting the edges of legitimate news scenes since the Reagan Administration. Known for his mastery of all communication formats, collection of all-terrain vehicles and love of folksy knick-knacks, he's said to hold several on-air personalities under his svengali-like mind grip. A self-trained pilot, he holds a black belt in Shaq-Fu. 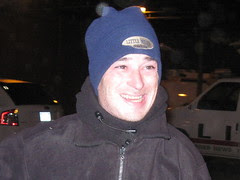 "The Siler City Assassin" - Another of the group's rural combatants, this one's especially slippery. Able to frame a spiraling football at a thousand paces, the man sometimes known as 'Wrenn Diddy' is believed to oversee several backwoods sleeper cells. A master of improvised weapons, he can kill a man with a single half-filled spit-cup. Thought to be THE off-air technician responsible for Janet Jackson's wardrobe malfunction. 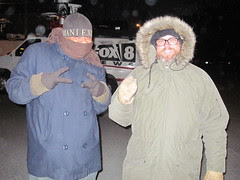 "Bruisers Two" - Less is known about these two goons than any other members of the camera cabal. At first glance, they're comic relief, but a closer look reveals their collective role as the group's 'muscle'. Dude in Blue never shows his face in public, lest his many victims seek their vengeance. Guy in green once held a packed school bus hostage until a missing 9 volt battery was returned. Approach with extreme caution. And maybe a Pizza Inn coupon. 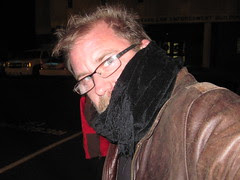 "Blowhard" - Perhaps the most despicable member of this unsavory association, this slinger of mud fancies himself a wordsmith. Mostly, he aggrandizes his own sordid history, when not acting as the team's Minister of Disinformation. Not above inflating his own skill-set, this weasel actually believes the lies he writes. Weaknesses include a love of leather jackets and a deep seeded fear of live trucks. Widely considered mentally unsound.

No wonder their plans rarely come together...
Posted by Lenslinger at 9:46 PM

but who wouldn't walk into battle with a bunch like that.