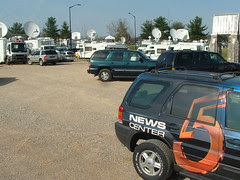 For some time, management and market forces have conspired to take the crew out of 'news crew'. Now, they've come for our cars. That's right, some local news photogs in the nation's fourteenth largest market will have to drive their OWN vehicles to all those ribbon-cuttings, house fires and county commissioner meetings. The mind boggles. Station-owned news units - those functional, tacky and often odorous automobiles - have been a staple of electronic news-gathering ever since the first affiliate slapped a logo on a driver's side door and tried to pass it of as a 'mobile newsroom'. These days however, every thing you ever knew about local broadcasting is crumbling, er, evolving. Just ask the news shooters at WFLA. Soon they'll be piloting their private rides to exciting news scenes across Greater Tampa - all at a reimbursement rate of 32 cents per mile - well below the federal rate of 51 cents.

Predictably, the depletion of their fleet hasn't set well with the fine photog staff down Florida way (or anyone else with a tripod in their trunk, for that matter). Who might be responsible for insurance liability, what happens when equipment is stolen, and just how long might they have to wait for reimbursement... they're just a few of the unknowns troubling the WFLA photojournalists -- and with good reason! Now, proponents of the plan will point to newspaper photographers, who've been driving their own cars to news scenes since before that soggy lump of fish-wrap you backed over in the driveway this morning lost all relevancy. Have you SEEN a newspaper photog's car? It's not the kind of thing you'd want to cover in rainbow-colored peacocks. Think 'Hoarders: Pimp my Ride Edition'. Or better yet, frequent a few tempests around Tampa in the coming months. Chances are you'll find all kind of half-crippled hoopties slathered in hand-drawn logos and freestyle, rhyming lies. At least if this highly entertaining thread is to be believed...

You know, it's tempting to go with that line of thought, to joke about thirty year old Gremlins stuffed to its ugly gills with high-tech recording equipment worth ten times the P.O.S. it sits in. But, really, there's very little funny about this soon to be standard practice. Company cars have long been an unspoken incentive to this less than lucrative line of work. While (most) managers wouldn't dare encourage a photog to speed en route to a story, they're regularly expected to bend space, time and physical feasibility. It's quite the grind, even behind the wheel of a late-model SUV full of scanners and free gas. Replace that with the beater your pizza delivery guy tools around in and you have one more HUGE reason why this gig ain't what it used to be. Just how station owners will hammer out the details remains to be seen, but one aspect is a foregone conclusion: Other stations will soon follow suit. After all, imitation is the sincerest form of hackery. I just wonder, what's next? Producers bringing in their own TV's to stare at at all day? Assignment editors kicking in for newspaper subscriptions? Anchors doing their own hair?

It used to be not uncommon to have photogs in their own cars. When I worked at KVIE in SF we used our own wheels (mine was a brand spankin new CJ7 - another photog drove a Jag XE - another a Datsun). But that was, of course, PBS. But I did see it up thru the eighties. We were required to carry our own insurance at a certain rate and were reimbursed the fed rate. Of course we were the only station in town with a cost of living raise built into our wages every year, so it kinda balanced out (tll THAT bubble burst too).

It's happening at my shop too. The current cars are not being repaired so when something happens to them...minor fender bender or water pump go out. They just go to the growing graveyard in the back 40 waiting to be sold for scrap. That's just one reason I'm now a short-timer; headed out of this busine...er...evolution of TV news.

Personally I would rather drive my own car for most assignements...excluding down in the "hood". At least MY car will start most times, the floor boards are not moldy and it doesnt smell like old gym socks in there. AND I know exactly what equipment I have and know that it works. Now I would probably feel different if the boss told me I HAD to drive it, no choice in the matter...and our station pays a bit better per mile then this station. What happens the first time Joe Photo's car breaks down on the clock? They gonna keep paying him? How about helping with repairs? I doubt it. Any shop THIS damn cheap needs to be avoided at all costs. Whats nest? Shooters having to BUY a camera before they will hire you?