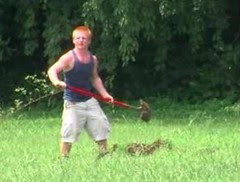 As one who craves indelible images, I can tell you yesterday slaked my thirst in a most unsettling way. It began with a smoldering home; a modest trailer soaked in cinders and warped by lethal heat. It caught us by surprise. Sure, Sheeka and I knew we were headed to a fatal fire, but between the GPS and the dashboard chatter, we almost forgot why we were racing to Boonville. That changed the moment we arrived, for the family members pouring out of the gutted mobile home were inebriated with grief. I can't blame them. Nor can we as news-gatherers really help them; the most we can do is spotlight their plight and hope some benevolent spectator soothes their wounds with generosity. Try telling that to a couple of teenage boys as they bury the dog that died by their Mother's side the night before. Or better yet, don't. They'll notice you and your lens in time. 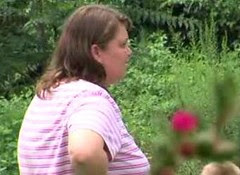 Approaching a loved one as they mourn is indelicate, at best. Handled wrong, it can be horrific - but with enough empathy and tact this grim business can be settled quickly, with neither survivor or spy losing too much of their soul. I know it sounds harsh, but the gentle inquisition of a victim's friends and family is as much a part of newscasts as the heavily edited press conference. I didn't exactly blaze a path up the widow's porch; that ground was covered long before I took up the lens. But in twenty years of television, I've had to knock on more mournful doors than I try to remember. But when you've zoomed in on as many tears as I have, those memories stick with you whether you want them too or not. So I follow my own prime directive: Do No Harm. It's a rule we followed far more often then the enemies of the Fourth Estate would have you believe, but since when do self-appointed experts really know much anyway? 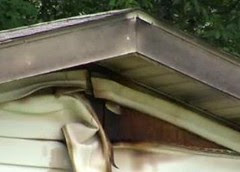 Not very often, I've found - which is why I ignore convention avoid bad karma. You want me to bum-rush a funeral and demand some answers? Not gonna happen. You need to me to appear on the edge of some stranger's heartbreak, maybe ask for a picture or two? Yeah, I can do that. I've done it reluctantly a hundred times and while it's never easy, it's possible to pull off without causing too much collateral damage. Take yesterday. When Sheeka and I got out of the car, the sorrow was as thick as the humidity. Youngsters wept as they pulled what they could out of the trailer's remains. One boy in particular stalked back and forth with a pistol jammed in his waistband. Sheeka and I exchanged looks but little more. Instead, she approached the first adult she could find and quietly introduced herself. I meanwhile hung back and shot video from the safety of my sticks. 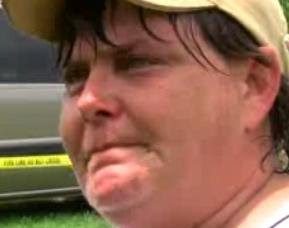 That seemed to be all the space the family needed, for they went about their grim tasks without demanding I ground my lens. Had they done so, I would have complied, for though it may irk some of my perceived superiors, I'm not going to do anything with a camera that'll make me stare at the ceiling all night. My less than heroic moments tend to play there on a loop. So I keep my karma clean, knowing no TV news story is worth me enhancing someone's misery. Besides, more often than not, the people WANT to talk. I can't explain it, I don't know what it says about our society. All I can tell you is that most folk want to brag on their beloved, effect whatever message might be brewing and maybe even set the record straight. I can help them do that and more times than not that tearful interview is followed by a thank you and even the occasional hug.

Too bad we don't put THAT on the air.
Posted by Lenslinger at 10:43 PM

I think the urge to speak is a self preservation tactic of the human brain. The only way to clear away the mental rubbish is to get it out in the open. Once done, the soul feels some sense of clean and healing can begin, no matter how long it does finally take.

True that, 'Slinger – every last word.

All "superiors" need to read this one. Well put.

dinoibo said...
This comment has been removed by a blog administrator.
5:42 PM

You know, everyone who wants one of these gigs should be required to read, memorize, and recite this.

Though I agree that "most folk want to brag on their beloved," too many are suspicious of the motives and reputations of the TV news operations represented by those of us who show up on their doorsteps. As a result, most folk tell me to hit the road, regardless of how sensitively approached.