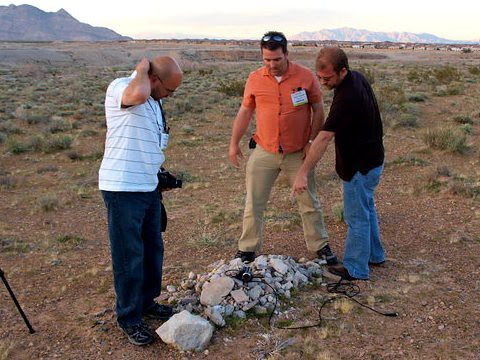 There's still tons to come in Team 'Slinger's smotherage of NAB 2010, but tell me: you ever buried a friend in the desert? Legal-wise, I can't say that I have - though the above photo sure makes it look that way. What can I tell ya? Gather enough TV News shooters on the edge of Vegas and something untoward is bound to happen. What exactly did I'll keep to myself, but rest assured this incriminating shot will all be explained in an upcoming video. In the meantime, I have to unpack, decompress and hope a certain rock-pile doesn't get discovered before I can establish a proper alibi. Now if you'll excuse me, I have to go Photoshop someone else's head onto my shoulders - lest the authorities round me up before dawn and the Greater Piedmont Googolplex is deprived of yet another frothy, feel-good feature piece. Stay tuned...
Posted by Lenslinger at 10:37 PM

Is it Mike Tyson?