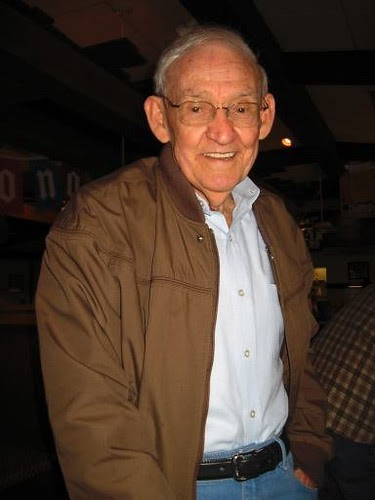 Upon stumbling into my very first TV station, I dropped to my knees and bowed at the feet of Slim Short. How couldn't I? I'd grown up watching this elfin, vested elder clown his way through two hours of live television every morning. The show was Carolina Today and it was as hokey as they come. As a snotty teenager, I often rolled my bloodshot eyes at the cornball humor of Slim and his hillbilly gang. But the day I gained entry to WNCT-TV, I quickly realized I was in the presence of giants. To Slim, I was just the latest in a l-o-n-g line of half-asleep cameramen. That didn't stop him however, from showing me kindness at every turn. Sunday, Slim - born Robert Allen - went to that great studio in the sky and I post this note through a curtain of tears. But since Slim never took himself too seriously, I'll try not to either. A few memories, however, do come to mind:

Every morning, Slim would do a number of live commercials. This entailed him sitting on the set with an art card on his knee. One camera would zoom in on the card while the other camera centered up on Slim. What followed was usually a rambling screed about the merits of said advertiser. It was supposed to last 30 seconds. It often exceeded two minutes. Director Walter Hearne would invariably come over the headsets and tell us to show Slim the 'wrap it up' sign. I never did. Would you rush Elvis off the stage?

Slim taught me volumes about celebrity and Southern grace. Whether in the studio, at various bar-be-cue dives or at the 30th anniversary of Carolina Today, his legion of fans pretty much genuflected in his presence. Slim no doubt enjoyed the adoration, but I never once saw him be anything but gracious, often deflecting the attention back on his supplicants. Sure, he didn't pay for too many meals back then (his money was no good in most local restaurants) but his goofball humour and trademark vests always made him a pleasure to be around - even when the bluehairs bum-rushed his table.

Slim lived to be 80. He was an avid bow hunter and a walking encyclopedia of all things Eastern North Carolina. But he was no health nut - at least when I knew him. Back then, he'd regularly slip behind the latticework set during commercial breaks and join his long-haired cameraman for a morning cigarette. He'd wolf down the massive cheese-laden biscuits that mysteriously appeared in the studio every morning - courtesy of some sponsor or another. One of my favorite memories of Slim is from a company pool party - in which I knocked back hefty swigs of Old GrandDad with this local, living legend.

I could go on, and as the scenarios reappear in my consciousness, I just might. I often refer to WNCT as the Roy Park School of Broadcasting and for good reason. I learned so much from Slim, John Spence, Jim Woods and others. They were all in the twilight of their careers and I was but the latest punk-ass to show up on set. But they took me under their wings nonetheless, taught me how local TV was formed and how it would never be again. I've benefitted from their tutelage ever since and hope to one day return the favor to those still struggling to fill Slim Short's shoes. Howdy Up, indeed...
Posted by Lenslinger at 10:33 PM

When I was a snot nosed, bare foot farm kid we were one of the first families to get a TeeVee. I remember the Carolina Today Show as representing all that was television. On a school field trip we journed to Greenville and toured the studios (still at the same location). We felt like we had been to a piece of New York City. I later moved to Greenville and had several occasions to appear on the Carolina Today Show which locally was the same as GMA,Today Show, MSNBC and CNN all wrapped together. Slim was the resident icon and I agree there has never been a person that personified what is good about the south like he did. We indeed lost a ledgen. Crookedpaw

You know you are getting old when your childhood memories start to die, literally.

Growing up in Kinston in the 60's you turned the TV antenna one way and got Carolina Today with their trumpet born "Carolina in the Morning" theme song on WNCT followed by Romper Room on WNBE (now WCTI) and in the afternoon WhITNey Hobo on WITN. Turn the antenna to the northwest and get Uncle Paul and all his Friends followed by reruns of the 1950's Mickey Mouse Club on a somewhat snowy WRAL or in the summer time with the antenna pointed a little further west get a fairly snowy but watchable Old Rebel Show on WFMY.

They are all gone now, these legends of early local TV who did what it took to keep black off the air for years. We are truly worse off for their passing because our kids have no reference when there were only 3 channels that were pretty clear and several others that came and went with the time of day and the seasons of the year and no one knew what they were doing other than "just doin' it."

So long Slim, may your legend out live your vests.

I was another one of those long line of bleary eyed cameramen standing behind giant tube cameras. Endless pots of coffee, sausage dogs, Krispy Kreme and genuine banter between broadcast pioneers. That's what I'll always remember. That's a wrap....

Thank you for posting your remembrances of Slim Short. I've been away from eastern NC a long time now, but when I was a very little girl, "Carolina Today" was HUGE with our family.

I don't remember much about the show, really. I remember Slim Short wore vests (I loved his name), and one guy on there had been a judge and wrote books about ghosts, and another man played the piano. I think Slim Short worked with Santa at Christmas to read letters from children on the air.


When I was in high school, a little group of us that had won a state-wide talent contest performed on the show...it was VERY exciting for us.

I'll miss knowing that Slim Short is out there somewhere.

How many punk-asses arriving on the scene today have anybody like Slim to teach them? My guess hovers around zero.

I arrived at WNCT in 1990, fresh from two years as a desk assistant in Pittsburgh...which was a far, far cry from Eastern NC. I remember turning on the tv my first morning in Greenville, seeing Carolina Today...and crying. What had I done? I was running the desk at WNCT, and came to work at 7am. Every morning, I would march my uptight yankee ass into the studio, fully armored in a power suit and a withering attitude. I will never, ever forget walking into the break room, meeting the director of Carolina Today for the first time. He said "Well, hey Sugar, nice to meet you, give me a hug." I was APPALLED. SUGAR? HUG?
Needless to say, Slim and John and Jim, and yes, even that director taught me a lot...mainly that at 23, I didn't know everything. Godspeed, Slim.

I have only just found out in the last few days that Slim passed away. I'm betting he's up there in the big TV studio in the sky, and Bill Overton is there with him, balancing the cameras and waiting for the theme music to start. Jim Woods is probably sticking his head in the clouds to see for himself if it's snowing somewhere before he announces it himself.

I have often said that my days working on Carolina Today were when TV was fun. I am so blessed that when I finally got into television, that my first job gave me the opportunity to work with TV legends. We didn't get paid much at WNCT-TV9, but on Carolina Today we had fun! I've still got some vhs tapes of birthdays being announced, names being drawn for Christmas, exchanging the gifts on air - those were the days of Krispy Kremes, collard greens and Pete Jones barbeque.

You will never be replaced Slim. You were an original, and the genuine article. My life has been made so much richer for having had the chance to grow up watching you, and getting to know you and work with you.

Thanks for this very nice tribute to Slim Short.

When we were young, my brother and I used to love watching TV while Slim Short read letters with Santa. We were well past the age where Santa was on our mind, but the show was always fun, and the cartoons were good. If I remember correctly, Slim always told the children to leave "Santy" a nice cold Pepsi Cola by the tree!

Yep...If you heard Slim Short's voice..it was time to get up and go to school. He had another show before Carolina Today that was a kids show. I was on that show..and so was my sister. I called a few years back to see if I could get video of it..but they told me there was a fire and the tapes got burned up. It was a kids show...if I remember right. Well...Mr. Slim...you are in the hearts and minds of many of us.

I'm late to the party on this thread but for some reason Slim Short just drifted through my brain and I wanted to see if he was still living. Sorry to hear he died back in 07. I was fortunate enough to meet him once. I was working at Belk in Greenville and he was making a purchase.I looked over the counter and I was star struck! Are you Slim Short? I asked. He smiled the biggest smile and said "Yes I am!" I felt like I had met a movie star haha! He was so genuinly nice and seemed to appreciate that I recognized him. I had grown up watching him, it was such a treat to meet him.

My grandmother was just talking about the good old "Carolina Today" days. For years, it was her morning ritual to have a cup of coffee and watch Slim Short, Jim Woods and Hal Moore banter. "They just don't make email like them anymore" she said. RIP Slim Short

«correction» "They just don't make em like them anymore"


Smiles are the best medicine. Visit my site for more information and have a good day. Cheers.

Hi, just passing by your site to see something that will interest me and luckily you impressed me with your great article and I have a great time reading everything that is written. I'm looking forward to see more of your write-ups. If you have time you can also visit my site which indicated below.

Does anyone have the Christmas special back in the 70s. There were a group af young children singing. I was one of those children ..Slim Short was so sweet. I miss him...if you find the footage..please send it to WNCT facebook.

The following time I read a weblog, I hope that it doesnt disappoint me as a lot as this one. I imply, I do know it was my choice to read, however I truly thought youd have something fascinating to say. All I hear is a bunch of whining about one thing that you could possibly fix when you werent too busy on the lookout for attention. online casino real money