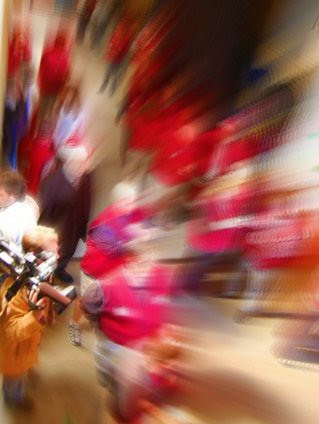 The Christmas Crush is all but upon us and for once, I won't be around to record it. After Tuesday, anyway. See, during the tumultuous time span that was 2009, I produced a ton of TV. What I didn't do is take a lot of time off. Thus, I won't be spending the dwindling days of this decade running from a giant boulder while trying to keep it all in focus. Rather, I'll be working hard to keep the three females I live with from jack-knifing a semi across the interstate just to get rid of me for a couple of hours. So, while I'm hiding in the garage pretending to sweep, know that a small part of me rides shotgun with every photog this time of year, for if I haven't shot every type of late December story there is, it ain't due to lack of effort. So pour yourself some egg nog as I run down the ten pieces of holiday flotsam I won't be dragging back to the shop this year....

I've giggled a time or two as firehouse buddies lit dumb blazes out back for the sake of my camera and I've chased the same brave men to unglamorous locations where Christmas week blazes cast a pallor over whole neighborhoods. I'll take the grab-ass over the tragedy any day.

Countless are the times I've loitered in downtrodden kitchens with camera at the ready, looking for action shots and trying not to salivate over discount turkey. It's often hard to tell who's the more annoyed: the staff, the volunteers or the poor shelter residents who only want extra cranberry sauce and a little bit of dignity.

Whether prodding grounded flyers while TSA agents rip up some old lady's sensible shoes, or sticking my lens in some poor schlub's car as a thousand of their new best friends form a two lane parking lot, I can crank out commuter kerfuffle without spilling a single drop of jet fuel.

Ah, with this one I'm intimate - for El Ocho does a coat slash food slash holiday toy drive like no other station I know. Salvation Army pantries, shopping malls and charitable laundromats are constant holiday stops because of it, but the ensuing goodness almost melts even my crusty photog heart. Almost.

Not since covering a prison riot have I so risked my life in the name of news. Just the other day I watched a lady of considerable carriage go down as otherwise upstanding churchgoers plowed over her in a consumer-induced frenzy. I'd have helped her up too, but I was too busy shoving discount Wii Fits down my pants.

Ever since the Interwebs made the Wish Book obsolete, the newsroom suits insisted we point a camera at it. Literally. Thus, It's not uncommon to see a grumbling photog fumbling over a reporter's desk this time of year, knocking over framed glamor shots as he tries in vain to get the wiggle out of the screen. Worse yet, he still has to go to the mall to get sound-bites.

This one's simple. After the mall, swing by the Consumer Credit Counseling office and ask the guy in the twinkly Christmas tie if you can play with his jug of cut-up credit cards. Don't worry, he'll have one. Pour it all on his office floor, throw up a light and shoot video until you begin repeating yourself. Fire a few questions at bad tie guy and you got a holiday package that can play anywhere.

8) For Him the Bell Tolls

Arrgh, those incessant bells! Their constant jangle bore into my skull the moment I drag my partner out of the car. Otherwise, I got little against lounging by the red kettle. Outside of airports, it affords a level of people-watching not available in polite society. Fancycams sure make some people generous, while others duck and run from the lens. Both are fun to chase through parking lots.

We photogs dig repetitive action we can leisurely exploit from every angle. With the advent of wireless microphones, we can sit back far from our subjects and eavesdrop all day long. Which makes stalking Santa' and his lap easy, rewarding work. If you can't train a camera on a jolly fat guy being nice to kids and come away with good TV, it's time to hand in your press-pass and go the hell home.

Another stalwart pitstop on the late December news cruising circuit. Synchronized lights, goofy home-owners, dumbfounded by-passers and pissed off neighbors...all reliable characters in the neighborhood kook passion play. Throw in a letter writing campaign traffic jam or power outage and you got TV gold. Just watch out for those blow-up Santas. Their eyes move when you're not watching...

Ahem...obviously I've had fun riffing on the predictable. But the fact that I and every other news shooter on the planet can recite this heretofore unwritten list is a sad reflection on the state of TV news. All our tools and glitz have brought us s-o-o far since the idea of digesting the day through local lenses spread throughout the country. That we still wallow in the same, lame, mundane stories year in and year out is an industry-wide shame. And in the age of information renaissance, it's the road to irrelevancy. Happy Holidays!
Posted by Lenslinger at 6:40 AM

here's hoping the ladies in your life don't strangle you with a string of christmas tree lights!

btw. i actually met pookie the other day. too bad it was on a story and i can't blog about it.

I'm working on the frenzied parking lot story today. Found a fender-bender and narrowly missed a fight over a parking spot. Almost got a guy yelling at someone else, but he saw my camera as he was rolling down his window and restrained himself.