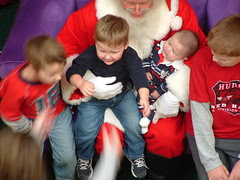 I called ahead. This time of year, no photog worth his white-balance would dare storm a shopping mall without permission - lest he catch a blow dart to the throat. Besides, it was my last shift before a long Christmas break and I was feeling especially benevolent. So too were The Suits. No sooner had I plopped down in the morning meeting than my holiday fate was handed down: Go see Santa'. I laughed when I heard it, in spite of myself: I've filled hours of airtime talking to that elf. If a return visit to a center court throne was all it would take to get me home, I was going to assemble a litany of little kid wishes that would choke up most of the Piedmont. After all, it's what I do. Others of my ilk may favor the ambush interview, the nine part investigation. or the troubling think piece. Me, I'm Dr. Feelgood. I'll slather the back end of newscast with unadulterated fluff and look you straight in the eye as I leave for the day before they ever get to Weather. You can have your top stories, I'll stick with my operas of the Z-Block. Which is why some fat guy in a suit and a hundred drooling rubes doesn't scare me at all. I consider it a target-rich environment. And this time I was gonna bag an easy kill and maybe do a little shopping... Or so I thought. 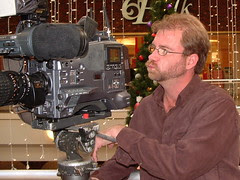 I even parked like a regular person --way out on the perimeter with the housewives and the high. Together, we filled in the edges of the MegalopoMall parking lot, locked our trunks and trudged toward the doors of the indoor emporium. But I hadn't arrived empty-handed. With a fancycam strap cutting into one shoulder, a tripod under my arm and a pocket full of camera-ammo, I schlepped toward the action like the news grunt I am. But I didn't mind. For once I got within range, my Bulls-Eye couldn't hide. No, he'd be squirming in hot red velvet as a hundred crumb snatchers lined up to jump on his lap. All I had to do was set up my sticks on the rim, slap a microphone on The Fat Man's furry lapel and roll tape as the enchanting encounters ensued. It takes precious little expertise to manufacture such pablum and I'd already done it a half dozen times. And once I wove a thread through the unhinged masses, I was gonna do it again. You ever navigated a packed shopping mall with half a TV station on your back? It's carrying a couple of stepladders into a moshpit, someone's gonna get hurt. 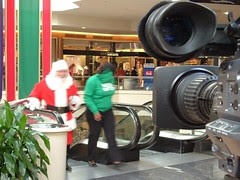 But I barely drew any blood at all as I tried to locate the MegalopoMall office. The PR lady I'd telephoned earlier asked me to check in when I arrived - no doubt to make sure I wasn't a suicide bomber - or worse yet, a consumer reporter. I was neither of course and after no more than a wink and a nod, I was free to find the Claus in question. It didn't take long. There, across from the Cin-a-Bon, a bearded gent held court on an oversized throne. 'Yahtzee' I mumbled under my breath and pushed past a flock of Goth Kids to close in on my prey. That's when I met her: a small woman in a bright red apron, funny little hat and year-round scowl. "You can video Santa, but you cannot talk to him. You can talk to the kids but you cannot put a microphone anywhere near Santa. Company policy." With that the world's angriest elf spun on her green velvet heel and stomped off to rob someone else of their dream. Her tone alone told me I wasn't the first photog to try to crash her party. And though she treated me like a drifter who only wanted to piss on Father Christmas, I didn't put up one iota of a fight. Instead I turned to make a beeline for the door, kicking myself for assuming it would be so easy and ruing the day Corporate America so complicated the holidays.

As for you, dear elfin lady, I hope Rudolph takes a dump in your stocking. I would, given the chance.
Posted by Lenslinger at 6:24 PM

Just make sure you follow the visit up with a call to the nice PR lady you talked to so you can apologize for not being able to put her mall on the 6.

When she asks why, and you tell her, Santa will likely have an elf vacancy in short order.

Hanes mall? 2 yrs ago they told me he was a union santa and union santas didn't wear mics!

Some underworld entity has organized and controlled all mall Santas. You've exposed only the tip of a very dark iceberg here.