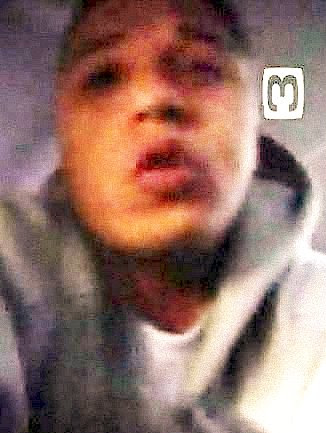 Do YOU know this putz? If so, you have the unique opportunity to clean up the city of Sacramento and better the planet at large. See, the dude's a thief. At least, he wants to be. Sometime on Tuesday this criminal mastermind broke the side window of an unmarked news car parked outside of a Best Buy, leaned in and tried like hell to make off with the KCRA fancycam. He did not succeed. But he did manage to turn the camera ON in the process and, much to his chagrin, triggered the 'RECORD' button. Now, those of you playing at home can guess the rest. Einstein here struggles to release the bolted down camera, fails to free it, then grimaces into the lens before taking off (no doubt to raid the nearest Victoria's Secret store for a good set of bolt-cutters).In the end, little harm was done. The window can be prepared, photographer Brian Fong won't lose his job and we have a 19 second clip that's more fun to watch than Bigfoot's latest sex tape. The only thing better would be to catch this little worm - if only to watch him squirm a little further on the evening news. Now if you'll excuse me, I have to go bolt down everything in my news unit - lest some sad-eyed loser pop up on TV rifling through my Tic-Tac collection. Hey, one man's breath mint is another man's treasure...
Posted by Lenslinger at 12:02 AM

Bolt cutters at Victoria's Secret? Must be a new line.

Oh how I don't miss that city.

Not only is Brian's job not in jeopardy... he was the newsroom's golden boy... not only was he smart enough to remember to lock his fancycam... he also brought back the clip of the week!