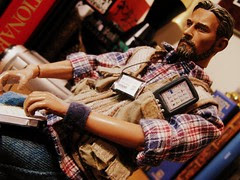 Listen to your keyboard long enough and you'll recognize its rhythms. That's what I do more nights than not: sit and stare at a glaring laptop until one of us starts to talk. I know, I know: strange pastime - but hey, the hobby shop was out of model airplanes. Besides, what other unpaid endeavor allows one access to a glowing, mocking screen - one whose very cursor taunts the creative spirit with every wretched blink? Forget I mentioned it. Just know that for every fortnight of thwarted expression, an epistle slipped by that even a self-doubting lout can live with. Here's ten from within 2009, in particular order:

Life, the Universe and Everything By years beginning, I was channeling Douglas Addams, in hopes 2009 would pack the punch of a Pan-Galactic Gargle Blaster. So far only fizz, but I still like the way this birth announcement goes down...

Dear Madam Here's a deal: You don't wet your pants whenever I point the fancycam your way and I won't be forced to vent my spleen all over the internets that very evening. Until then, clean up on Aisle 5.

Eau De Photog Speaking of messes, you oughta get a whiff of your average news day. Equal parts smoke plume and generator fume, this bouquet boasts the bottom end of a cadaver dog and the top notes of a homeless camp. And that's not counting the stench comin' off that guy behind the camera...

You There... Of all the blather I've slathered across the web this year, this entry sparked the biggest response, from coworkers who fived me in the hallway to the shapely object of my disaffection who cornered me in the edit bay that day. Can't say I regret a moment of it...

Satisfaction Doubtful As an avid student of the Exploration Age, I've been meaning to fashion a post after those great recruiting posters promising little more than pain and suffering. I just never had a suitable image to go along with it - until a frustrated Carter Francois popped up on Flickr.

Fair and White-Balanced Far be it from me to hate on another news shooter, but this particular entry was interpreted as such. More than anything I was admiring a competitor's chutzpah - if not his idea of suitable light. Still waiting for this guy to bean me in the back of a head with a nine volt battery someday...

Pursuing Hootie I've chased a lot of famous people, from Nikki Sixx through an underground parking garage to Paula Abdul through her latest delusion. But few have been so gracious as the artist formerly known as Hootie - who even took time to chat about The Attic.

As Seen on TV Long before Billy Mays ordered up that one last 8-ball, I tried my hand at beign a pitchman. So far no one's hired me to host their infomercials, but I feel that has more to do with my budding curmudgeon(ism) than my spray-on beard.

Breaching the Fiefdom Hey, even a jaded gargoyle like me can't help but notice the Fourth Estate is crumbling beneath my talons. Thus I filed this grim report from my not so lofty perch - despite the fact that, assignement-wise, it's been a pretty fly year!

No Rhythm Required Then again, perhaps I'm still a bit giddy from the Father-Daughter dance I attended last February. Ya know, it won't be long before I'm back in the Empire Room, threatening my teenage daughters with one photog's attempt at The Robot... I knew this blog was good for something.
Posted by Lenslinger at 8:25 PM

Happy New Year Stew. I gotta get you on MUR this year... we should do a www.wtoku.com interview.

Let's try again http://www.wetoku.com that is.