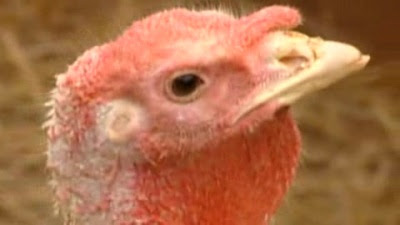 I was the first to reach the summit, but nowhere near the last. Brown Summit, that is - a placid swath of Gawd's Country not known for its soaring heights. But yesterday forces collided that thrust this Guilford County town into the stratosphere; a suddenly coveted peak amid a very frantic week. Okay, it was just some nice family's backyard, but the way we media jackals acted, you'd have thought it was some sort of cameraman Shangri-La... What it was was a juicy slice of pre-Thanksgiving television, the kind of seasonal feature that newscast producers salivate over. But I'm getting ahead of myself... 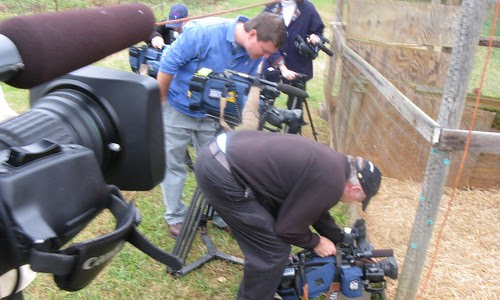 'Local Kids Give Obama Turkey'. I did a double-take when I read the story slug. Certainly the President wasn't gonna wing his way down to the Piedmont the day before Thanksgiving. Not when there's some previously ordained bird and owner waiting in a 5 star suite somewhere inside the beltline. Hey, I've done enough White House Christmas Tree stories to know that not a single warm prop makes it to 1600 Pennsylvania Avenue without three weeks of bureaucracy and a big ole pile of taxpayer's money spent in the process. Reading on, I realized I was right. Barack Obama wasn't visiting the Ibrahim farm. Brad Miller was. 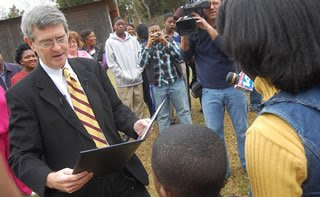 Who dat? Congressman Brad Miller, of course, member of the United States House of Representatives from North Carolina's 13th district. Seems once the White House picks a turkey to officially pardon, a coterie of lesser politicos fans out to offer a few consolation prizes. Such was the case yesterday when the good Mr. Miller showed up to bestow a Presidential letter of thanks on two impressive kids, 10 year old
Mariama Ibrahim and her 7 year old brother Anwar. If all kids were as centered and resourceful as these two, the likes of Miley Cyrus wouldn't have such a loyal following. 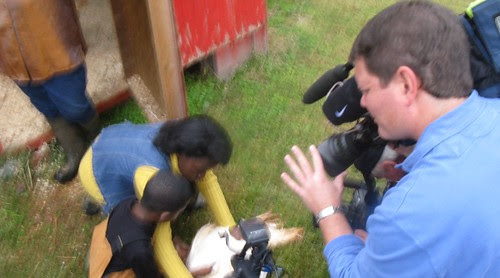 But hey, you didn't come here for heartwarming stories of kids and livestock. You want feuding news crews, loathsome elbow blows and badly bleeding deadlines... You'd think there'd be plenty of that here. After all, no less than 5 TV lenses and 1 still camera jockeyed for a spot outside said turkey coop. But nary a harsh word was exchanged - let alone a drop-kick. Maybe that's because only the old-timers showed up; crusty gatherers schooled in The Art of the Grab. Thus, we all went about shooting our frothy little show-ender like we were the only camera for miles. Sure, it would be sexier to report a fight broke out and the prized turkey in question was ripped to pieces in front of God and everybody - but it just didn't. go down. like that...