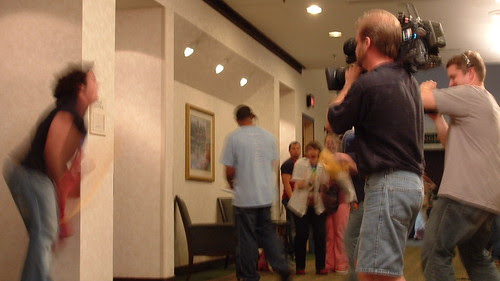 The American Idol auditions are back and for once, I'm not obligated to watch 'em. Sure, El Ocho still proudly airs this broadcast juggernaut - but unless local boy Chris Daughtry has a cousin who sings love songs in a lilting Irish brogue, I don't forsee any more free plane rides to Hollywood for me or Mrs. Smith. Still, the Idol shadow looms long; as soon as some caterwauling waitress takes center stage, friends and acquaintances hit me with the same old questions...'Do those people really think they can sing? Do they line up to be humiliated? Is Simon Cowell really that big a dillweed?'...to which I can offer an unequivocal "YES". But I find short answers don't suffice, so here's a few obligatory thoughts from inside the World's Cheesiest Sing-Off - in hopes that nice neighbor lady will stop asking...

Sure, a few of the folks who assemble outside the auditions only want their fifteen seconds of shame, but the vast majority are quite convinced they're on the precipice of global stardom. This belief has little to do with vocal ability, and more to do with unwise parental encouragement and in-car acoustics. Hey, YOU sing along to the radio while driving, right?

Whatever doubts a contestant may have about their singing talent quickly dissolves when herded together with thousands of other delusional crooners. With worldwide adoration seemingly minutes away, gangbanger bonds with sorority chick, metrosexual high-fives redneck. I've often thought if we could only capture the harmony of an America Idol audition crowd, we could bring peace to the Gaza Strip.

Show producers do NOT spike the crowd with weirdos, actors or ringers. Those folk show up on their own with costumes and imaginary friends in tow. Producers DO scan the assembled masses for the freakiest, the geekiest and the super-hot. What they have no use for those singers who are 'pretty good'. Pleasant, sane, adequate? NEXT!!!!

Backstory trumps all. Above all else, Idol is a TV show - not a talent search. A person with a tragic background, inspiring history or cute accent will advance faster than the generic choralist. Example: Long before Kellie Pickler uttered a word, I - and every other heterosexual male - was clocking her every move. When she opened her mouth and delivered a serviceable vocal and sad biography all wrapped in a ditzy Southern drawl, the television Gods took notice too.

By the time, contestants make it to the celebrity judges, they've sung several times for producers, waited d-a-y-s in line, made new best friends, hyperventilated a time or two and ogled Seacrest up close and personal. That any of them maintain a modicum of sanity (let alone talent) when shoved into a room full of lights, lenses, Randy, Paula, Simon and crew is a true testament to the human condition.

Most of course fail miserably. Camera crews from Idol and the occasional FOX affiliate hover around Ryan (a really nice, Southern boy at heart) and family members as they make their egress. Seachrest is the only one (on camera) who knows if said singer triumphed or choked and conceals his hidden knowledge well. Most singers slink out, heart in hand and walk away mumbling. Some emerge apolectic over their dismissal and curse a blue streak - which of course attracts even more cameras - at which point we chase them to their car, their bedroll or their parole officer.

So there you have it, a glimpse into the circus that is early-season Idol. Though it's certainly lost soem of it intial oomph, critics pronounce this phenomenon dead at their own peril. While I would never encourage my own kids to try out for the show, it has proven a successful career path for a scant few and dashed the dreams of thousands more. Love it or loathe it, it is still brilliant television.

Then again, so was Hee-Haw.
Posted by Lenslinger at 11:40 PM

looks like the pinchers are gonna pull me into it again this season. damn kids.

Oh no, another Idol season has begun? God help us all.