The Stuff of Blockbusters 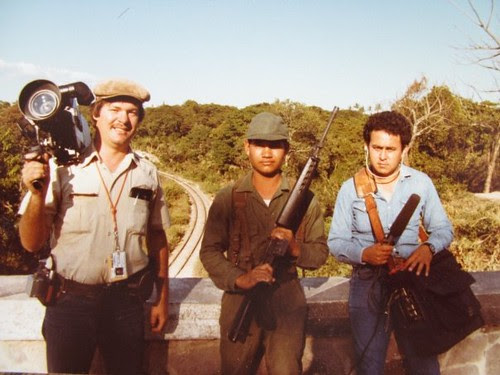 Whenever I feel silly or vain for amassing so many pictures of myself with a fancycam, I peruse the personal gallery of one David R. Busse, intrepid everyman, legendary lenslinger. Taken as a whole, his photos play out like some unlikely storyboard; frozen frames from a life too rich and varied to possibly be true. Here he's pictured chillin' with soundman John Casillas and a Salvadorian soldier along the Pan American Highway near Cojutapeque, El Salvador, circa 1982. I'm no film critic, but in my not so humble opinion Hollywood would do well to stop regurgitating old TV shows and start dramatizing the plights of people who've spent their days riding the line between access and peril - if for no other reason than to see the likes of Brad Pitt rock a hat and 'stache like that. Sure, it'll never happen but from where I sit in the multiplex, King Kong ain't got nuthin' on David R. Busse...
Posted by Lenslinger at 11:18 PM

That's one awesome picture. I've heard tales of the days when news stations would send crews around the world to cover the news. Alas, they seem to be nothing but tall tales these days.

When I graduated from Mizzou in 1979, Dave Busse was already a legendary alum. Never met him, though. He may have been too busy.

Ah yes, documenting the Reagan-era proxy wars (note US gov issue M-16) in Central America probably wasn't all poparazzi-Paris-Hilton-ish, was it? People who live like him (Richard Angle comes to mind), amaze me. Must. Love. Danger. & Adreneline.

My wife says Dan Ackroyd would be a better choice, particularly if he were more in character from his "Ghostbusters" roles.

Mr. Busse is a cameraman's cameraman.

He's doing what so many of us want to do with our lives!

And it's not over yet!