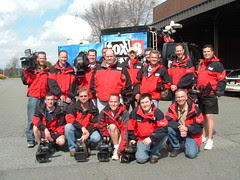 Man, just when my self-esteem was on an upswing, the clever newspaper website video people weigh in with another dismissive assertion. This time they're out to learn why TV News shooters don't post 'web-exclusive' video on-line (something the average TV photog doesn't really think about alot as he's racing to fill HOURS of airtime a day), but I'm not here to fight that fight. Or fight at all, really. I wish, rather, to be an ambassador - to brook a better understanding of my most beleaguered TV breed. But to build a relationship, you have to know how your new partner views you and therein, lies the rub...

'Just as the print media has always had a better reputation for their ability to cover a story in depth and have larger staffs to cover more community news…their photographers seem to have better reps too. Print photogs are seen as visual artists and have a history of being part of the journalistic tradition. They are seen as independent individuals with their own identity and vision. Video/TV photogs do not seem to have the same polished reputation - even though they provide pretty much the same commodity to their medium and have equal aesthetic and creative abilities. This may be because (opinion again) they work with a reporter who is seen (first) as a TV star and (second) as a reporter. The amount of equipment traditionally carried by TV photogs turns them into living breathing pack mules. They set up live shots and run microwave trucks. So there they are: the perception is subservient, technician, pack mule.'

Wow, I feel like I should go shower off or something. Derision aside though, these print people do have a few good points. We TV News shooters do appear slovenly compared to our on-air partners. I mean, have you seen the amount of hairspray those people travel with? I once saw a consumer guy take out an entire family of woodchucks with a single can of Aqua-Net.

'Unlike still photogs who shoot the story along-side, but independently from the reporter, the TV photog’s visuals are driven by the style of their reporter and interwoven with the words written and narrated by the reporter. The identity of the photographer is lost in the shadow of the on-camera person, who is recognized every day for their efforts. Rarely is a TV photog given recognition - while their print counterparts get a byline whenever work appears.'

Actually the photog usually sets the visual pace. Ask any reporter who's had to stretch a tape full of shaky and blue footage into something coherent. As for the inherent lack of credit, it's hard to outshine the spotlight you helped manufacture. Then again, no TV shooter worth his or her first white-balance sticks with the gig for plaudits alone. There's more glory in gutter-repair. But that really ain't the point.

'This lack of identity has made television photographers an almost invisible class. While they are what sets television news apart from print and radio, they are not given recognition as individuals or even allowed to post their images to the web so they can earn some individual recognition - because somebody else might profit from their work besides the company that owns them and their images. The no-competition contracts most photogs sign even preclude them from doing much video on their own that might compete with their own stations.'

Personally, invisibility is a professional goal of mine. I work hard to blend into the backdrop, so the person in my crosshairs forgets I'm there. Sure I could worm my way back on-air but I learned a long time ago that being gestured at in the Wal-Mart parking lot don't feed the bulldog. I'm far more interested in visual storytelling, be it my preferred solo methods or as part of our continuing team smotherage on the clamor of the moment. I'm all for my work appearing on-line (as it regularly does). Hell, I'd gladly recut an extended mix-master version for the web alone, but until the suits lop off a few newscasts, I'll be out in the sat truck camp, feeding the on-air beast. I see no shame in that. As for non-competes, I ain't signed one of those since Bush the Elder upchucked on that Japanese dude. Now that was great video...
Posted by Lenslinger at 5:57 PM

I'm still thinking about that haunting piece you did on the sex offender in prison. Even I could see your touch on that one, and I'm just a lowly musician, not a journalist. Thanks for your thoughtful comments.

You would think that these Print types would have time to do a little more in-depth work and see how it really works.

Hey Lens...
I'm NOT a print person...those observations were kind of how I see broadcast news photogs. Did 28 years in the field lugging gear, much the same as you and loved the invisibility too. When I worked with a good reporter, the words and visuals meshed and made something greater. When I worked with a bubble-headed BB, the original story often ceased to be and it became all about them.
One thing I did notice - whenever I worked my ass off or worked on a major story, the good reporters always wrote in a comment about who did the shooting. They didn't mind shareing becaue they knew who made them look good.
The non-compete is making the rounds again in my market...just had a couple of friends let me know they were required to sign.
cyndy

I stand corrected, Cyndy. And I know your pain with the bubble-headed set. I don't fault your observations, either - just responding to the endless derision of some of the newspaper video neophytes. I'm glad they're happy and will willingly sample their work. But I'd be alot more open to their efforts if they stopped telling me how frighteningly obsolete I was. As one who has passed up the opportunity, I can tell you not every TV news photog wants to work exclusively on-line. That seems to be a stance that sends too many new owners of shiny consumer-cams into haughty scoffs and shivers of disbelief. I just look forward to the day we all meet in the middle. Thanks for writing.

Print folks are parents with a brand new baby - and they think it's the most beautiful wonderful baby in the world (and they refuse to look at tother babies). Some of the online stuff gets to me, as do some of the comments made by still folks in my haunts. SFBAPPA had a Digital Workshop a while back and I had to fight to be able to put on a workshop...it seems they didn't think TV folks had anything to contribute and they only wanted "great" still folks presenting. This from an organization that is supposed to represent both sides.
Oh well...sometimes both sides are more ego-driven than they should be....

I tell the truth. More than most of the crap I am forced to sling on the air is stuff I don't want any one to know I shot or edited. TV news is about how fast I can get an image on the air and nothing about the quality of the image. It's the race to beat the other guy instead of being an artist.

Who wrote that crap, a newspaper marketing wunderkind? Not to worry, they're desparate since their business seems to be going the way of the dinosaur and they're desperate to be hip and techno.

Like Cyndy said they think their baby is the best. What a laugh.

I am now back in "mellow mood." No twitches, no angst...those small things are irritating...but in the long run it is better to work together. (Although sometimes the little jibs and jabs hurt.) I've been a new parent and an old parent and a non parent...and it was strange in the two latter stages where I could see all of my stupidity as a new parent shining. They'll get over it, just as we will...and we'll laugh at each other and outselves as we kick back and down a jug of vino.