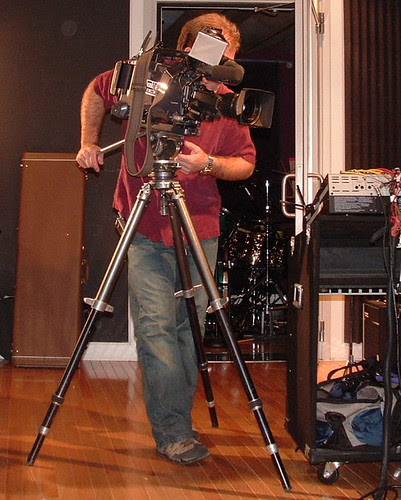 I was gonna hold off telling you why I dashed to Nashville, but a certain giggling hick's rabid fansite figured it out: I went to see Bucky. Covington, that is - former American Idol Contestant, fellow Carolina Boy and official Friend of the Show. I found him in a recording booth outside Music City, slathering swamp grease vocals all over his post-Idol polish. He and his hosts - the fellas from Sawyer Brown - were perfect video specimens, ignoring me completely as my lens and I skulked about their swanky digs. While they twiddled knobs and laid down tracks, I moved around like an assassin and tried not to tap my foot. It was tough, though - as the song being built around me was both highly approachable and surprisingly potent. (Think young Charlie Daniels channeling Axl Rose...if you can.) My bosses ask that I not say much more before our series piece airs and since on their stipend I rely, I'll happily comply. Coming Thursday: Quotes, photos, video links and enough southern fried charm to choke a Possum Queen. For now though, Bucky Fans - scrawl down these two words: Empty-Handed.
Posted by Lenslinger at 7:31 PM

Love your way with words! Charlie Daniels meets Axle Rose, I know it will be kick AZZ. I cant wait for this CD. Cant wait for Thursday! You rock.

Excellent! Loved Bucky on AI and have loved him even more since he got off. I am really looking forward to following his career and getting his first CD in my hands!

Yes sir, we LOVE our Long Haired Country Boy! Rabid Fans unite. Once again, it was a pleasure to visit your blog.

Bucky Covington is an amazing talent. He totally captivated me on AI this season and in concert. I can't wait for his first cd and the many more to come. I am now and always be a supporter of his in the long career that I am

Thanks for the Bucky post. Can't wait to see your pictures and get Bucky's CD :)

Loved reading your blog and can't wait for the pictures and videos. Bucky Covington is the real deal and I too can't wait to get my hands on his CD! GO Bucky!

ahhh...once again the crew of Stewart and Shannon come through! Thank you for always giving our Southern Idol such wonderful reviews. We look forward to seeing the piece you did-already love the song!
Mama Tee

AHH.. You are a man with tantalizing words. Thursday can't come fast enough for me. There's nothing like a dose of Bucky Covington with that sweet southern voice and charming smile.

Anxiously awaiting Bucky pics and so looking forward to the Bucky CD!

Anxiously awaiting Bucky pics and so looking forward to the Bucky CD!

Stew, does your wife know how many strange women are writing to you using words like "tantalizing" and "pleasure." Or how about "can't come fast enough for me."

Man I wish I had you readers.

It's hard out there for a pimp.