Phantom of the Midway 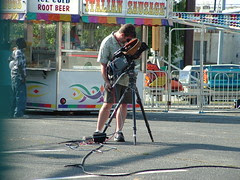 He’s a familiar figure on the Carnival‘s edge, a lone figure tethered by cable and hunched over an upturned lens. Locked in a lover’s embrace with his viewfinder, he seems oblivious to the cotton candy, carnies and chaos around him. His casual attire denotes a life of leisure, days spent wandering from one sunny vista to the next, pointing his camera at whatever strikes his fancy. But before you dismiss his vocation as frivolous and climb on the Tilt-A-Whirl, consider this: 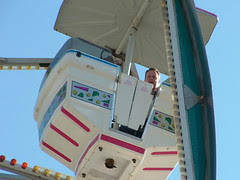 He’s not alone. Chances are there’s a wacky weatherman hovering aloft and babbling into a wireless microphone about low pressure systems and local charity events. The weatherman’s giddy with excitement, simply jazzed to be out of the studio and amid his viewers. He spent the last half hour lobbing basketballs at impossibly angled rims, hugging old ladies in housecoats and signing autographs. Meanwhile our friend behind the lens pulled cable, assembled gadgets and tuned in the signal, all while fending off curious twelve year old jacked up on sugar. And that’s just his latest stop. 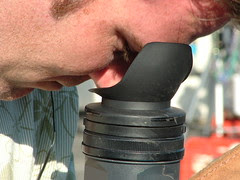 If he’s a day-shifter, he’s already televised a talking head or two, shot a reporter standup by the City Landfill, zeroed in on a few trash-diving seagulls before melding all three together in a darkened edit suite. If he’s nightside, a whole shift of adventure awaits: city council meetings, inner city crime tape and dinner in a bag. If he’s lucky he’ll wolf it down over a timeline as he pounds In-Points into a laptop. But don’t feel sorry for him, for this photog is truly free. He loves the open road as much as the open iris and he’ll take that big camera ANYWHERE. 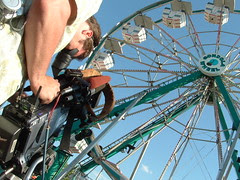 I just want you to see more than a gizmo-laden schlub when you look his way, for he is most likely a expert on your area, a handyman of legendary status and an artist at heart. For every time you’ve leaned into your screen in wide-eyed wonder, he’s recoiled from his viewfinder and smelled the news hours before it made air. So forgive him if he seems distracted, pardon him if he’s acting like he’s waiting on a bus amid all this fun. He’s merely at work, lost in thought the way you probably were over the copier this morning. If it makes you feel any better, buy the guy a hotdog. Tell him Lenslinger sent ya.
Posted by Lenslinger at 7:48 AM

Buy that man a BEER. I would. Cheers.

And someone buy Stew a BEER, too..

You paint an accurate picture that shoots straight to the heart of a television news photographer.

Mind, body and soul. From cable runs to bagged lunches.. Thank you for making sense of it all, especially for those outside the business.

You make all of us proud, Lenslinger.

Did you get my email about tripods?

Hi Stew, Eric Chilton here. Hey I was out there that day!! I wish I had known that you were there I would've popped over for a visit. Van and I chatted for a while before the truck showed up. Anyway, hope all is well...and as usual your blog outshines mine HANDS DOWN!!! Keep up the good work.
Eric Chilton
www.thelatenews.blogspot.com

ERIC, When I got back to the station (from dropping off a piece of equipment at the carnival)I noticed you were broadcating from the very spot. Sorry I missed you! Next time I'll hunt you down. Oh - enjoyed your musings on your gathering with the Jay Shurling and clan. I miss that dork.

RUSTY - Sorry, I got your e-mail and am about to respond to it. Been a busy week with sweeps and all...