Desk On A Dashboard 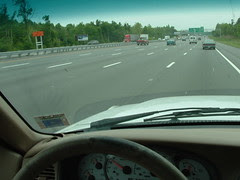 I’m lucky enough to have a desk in the news room, but I spend a lot more time behind the wheel of my mobile office, a 2000 Ford Explorer with bright shiny logos and a permanent impression of my butt in the driver’s seat. Though I sleep at home every night I often travel hundreds of miles to get from dusk to dusk. At times I feel like a trucker, a cabbie, a cop - cruising a beat from one jurisdiction to the next as I ping-pong back and forth across the Piedmont Triad. Friday it was Rockingham County - Wentworth, Eden, and Reidsville passed under my tires before ending up back in High Point. The day before I ricocheted between Greensboro and Winston-Salem more times than a Dell rumor. On Wednesday I navigated new terrain in lower Alamance County, before rolling homewards along the rolling rural hills of Highway 62. In between all the traveling, I shot a little news. 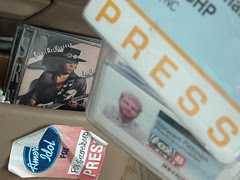 Since I log so many hours in the news unit cockpit, I’ve made some modifications. Most of my colleagues fill their floorboards with scanners and such, but I am far less enamored with being constantly interrupted. Thus, I’ve replaced all that static and blather with a mixed bag of aggression rock, from Johnny Cash to Jane’s Addiction, punctuated by a diverse diet of local and national talk radio. I’ve yet to buy one of those Audio Books but I probably have a half dozen Stevie Ray Vaughan CD’s in my center console at all times. A man’s got to have his medicine after all. Along with all that aural input I pack the usual number of press passes, county maps and mini phone books. Bent business cards and dead nine volts litter the floorboard, along with the finest in fast food ketchup packets. But don't worry. Every six months I clean out my trusty ride, whether it needs it or not. 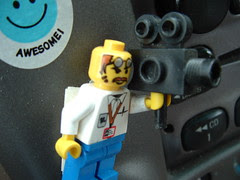 But life behind the news wheel is more than a never-ending road rally - its also a parade! With all those multi-colored logos screaming your station’s merits, you’re bound to get your share of your attention. All this can make for the most delightful stoplight encounters, if you don’t mind the occasional hand gesture. Most often though, people just do a double-take looking for a locally famous face. When they see a bearded fellow in a tropical print yelling into a cell phone while wolfing down a burrito, they usually lay on the gas a little. After all, the best defense is a good offense. So if I blow by you in the breakdown lane, don’t take it personal. Chances are I’m late for a groundbreaking, a train wreck, or like yesterday, a Repo Man with an ass full of lead. Whatever the destination, know that there’s a cell phone full of unanswered message on my hip and much of tonight’s newscast under the visor. If I stop to dawdle, I’ll pay for it in the edit bay. Now get out of my way; somewhere there’s a keynote speaker clearing his throat and waiting for his close-up.
Posted by Lenslinger at 8:51 PM

that lego cameraman is misleading. no journalists shoot film anymore, do they?

Hi, I was just looking around some blogs and checking different templates for ideas. Good blog with a nice template. I can start my own blog on Go cart plans thanks to your blog. I will visit weekly by the way. Like your ideas.

Hello Lenslinger, thanks for sharing this info. I've been looking everywhere to find info about american idol auditions 2006 to share with my readers at http://www.auditions.info-1.org/auditions/2/american-idol-auditions.html. Your post this post is great.

who would have thought that????Regards, american idol auditions 2006

Great blog. Found your blog while searching for more information at yahoo about this post . Your blog has quite a lot of interesting thoughts. Keep up the good work
Thanks,
american idol auditions 2006