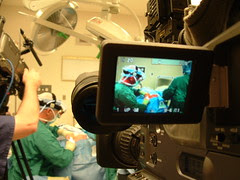 Occasionally I’ll find myself in scrubs and booties, loitering by my camera as surgeons move around me like ninjas. Today was one of those times. When a press release demanded I report to surgery STAT, I did so, joining a pack of fellow camera-jackals straining for a shot of a local hospital’s newest ’breakthrough procedure‘. On the Gnarl-o-Meter, it ranked pretty low. In fact, I rather enjoyed watching the surgeon slice cartilage off the patient’s ear and shove it up his nose. It seemed like an awful rude thing to do, but the guy with the sheepskin and the steady hands insisted it would help the old man on the slab breathe easier. Besides, who can argue with a plastic surgeon who listens to Ray Charles as he slices and dices? 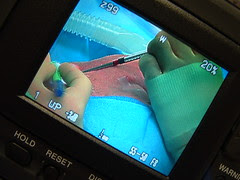 Staring up into my viewfinder, I couldn’t help but recall earlier sojourns into sterile environments. About eight years ago I shot an eye surgery LIVE! for the five o clock news. Hovering over a surgeon’s shoulder as he sliced an eyeball with a tiny laser, I took special delight knowing the groan-inducing imagery I was capturing was instantaneously beaming into people’s living rooms across the Piedmont. Hey, how’s that pork chop? Want some cornea on it? Of course, even that doesn’t compare to Robotic Prostate Surgery! Sure, it sounds like a punch line in a Conan O Brien monologue, but its a real surgery - one that involves scary robot arms and plasma screens blaring images of tiny blowtorches slicing fatty tissue around the prostate. Slather that on yer chops! 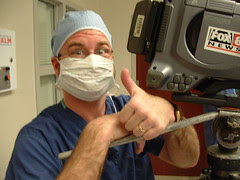 Luckily, for me, I had some close colleagues to share the experience. So what if I don’t know his name? He’s...that guy...from the other station. Last time I remember seeing him was at a sweltering Special Olympics track meet two towns over. Now we’re scrunched in a small room together, wearing paper hats and making goofy faces behind our surgical masks. Call it a part of the Photog Code, the long-held practice of barely acknowledging each other while stalking the edge of crisis. Hell, we’ll probably discuss the finer points of today’s procedure someday down the road, at the next train wreck or rodeo or groundbreaking. For now though I’ll keep quiet, monitor my viewfinder and keep telling myself I’m not wasting my life away behind this lens.