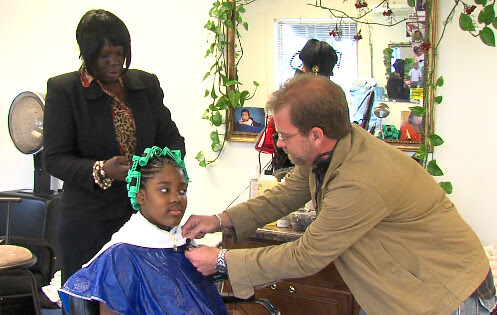 FAR BE IT FROM ME to pop out a plastic fern and pin a microphone to your smock, but I couldn't help but notice you were getting your hair did! Which is quite the cowinky-dink since I’m doing a story on that very thing for our late breaking action packed newscast! Ya know, childhood hairstyles has been issue I’ve been pondering every since my assignment editor shoved a crumpled print-out of an e-mail the night guy saved into my Cheeto-stained fingertips about thirty minutes ago! Now, I know what you’re thinking: What’s a fella with a feathery melon like me know about haircare? Nothing a thirty year old can of mousse crust wouldn’t fluff up, I assure you! But from all that I gathered after reading some press release during that last long stoplight, pubescent grooming is first and foremost on the minds of men and women age 18-49! That may make precious little sense to a young lady like yourself, but I can assure you that someday when you grow up and are lucky enough to get a job you used to want that there will come a time when one of your many bosses will come up with some cockamamie idea that will instantly become your own personal manifest destiny. Manifest Destiny, that’s old school for ‘you gotta pick up ALL the socks in the rec room before you can even expect to watch Sponge-Bob or Breaking Bad or whatever the kids today zone out in front of just for fun’. Hey, speaking of television, do you ever watch the news? I don’t but I have it on very good authority that every night around 6:08 those pretty people run out of bad things to talk about and suddenly wanna sell some soap. Once that’s over, they’re usually in the mood to tease the weatherman but not before chortling over some banal piece of videotape featuring cute kids, old folks or woodchucks in tuxedos. Well, today you’re the woodchuck and back in the live truck I got some ruffle-fronted monkey suits that are gonna be all the rage once your friends see you sporting one between weather and sports! That is if your friends watched the news! Chances are they don’t! But see back in the say there were only a few buttons on the remote control and even those were hard-wired to the back to TV sets the size of bank vaults! Back then, we’d trudged halfway across the room to just to find out what some other uncle looking fellow had to say about hog futures! Most times it was the exact same thing the only other two guys on at that time had to say so very often we’d do the unthinkable and turn the TV OFF! Yeah, no kidding! I once spent a whole summer outside! Over the course of two months I watched only about three fifths of a Mork and Mindy episode and that was without ever realizing that Robin Williams was jacked out of his gourd on the kind of stuff that could make a grown man stay up all night talking to the kind of people he wouldn’t even look at in the light of day, but, HEY - How I spent the better part of that one lost summer isn’t important right now! What IS important is that I get your inner most feelings on the role of personal aesthetics in the post millennial renaissance. Now, I now that’s a mouthful, but we’re getting paid by the syllable here so if you don’t mind, just say and spell your first and last na-- What’s that? ... You don’t want to be on camera?