His Cross to Wear 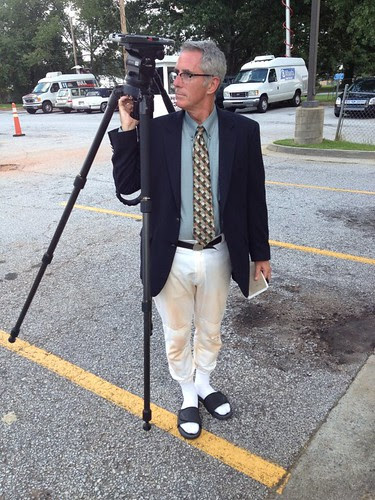 You might question his fashion sense (shower shoes and soiled khakis? How Two Thousand and late!), but news shooters everywhere will agree Doug Richards is sporting the PERFECT accessory: a fully erect tripod. Now, I know what you're thinking ... it barely matches his belt. But when a field reporter of any persuasion latches onto a set of sticks, he (or she) transcends convention, surpasses fad and strikes a singularly noble pose. Sadly, it's a look not many young reporters go for. They're far too busy juggling status updates to grope anything as lowly as a camera stand. That's their every right, I guess. But as a guy who often schleps solo, I have to wince whenever a partner departs the car empty-handed. Don't get me wrong. I can drag along every tool I got and still run circles around the penny-loafer set. But damn if a little assistance doesn't go along way when you're rushing headlong into the void. Or even when you're just trying to get through a set of double doors without reconfiguring your biscuits!

Sooo, if you're a talking hair-do under thirty and are lucky enough to even have a photographer, do us all a favor and lend some assistance once in awhile. That surly guy with all the press-passes dangling from his rear-view mirror will appreciate it, your story will look better and (s)he may even tell you the next time you have bits of guacamole dip stuck to your teeth.  Who knows? You might even work up a callous or two. Those will come in damn handy at your next shop, when your new boss offers YOU a trunk full of tools and his hearty congratulations on being the Middle Valley's newest video-ninja slash multimedia marauder.

Do yourself a favor, though: hold out for the jet-pack. You'll need it the next time you're gettin' wild with a turnstile while balancing all kinds of pricey gizmos you don't own. Trust me.
Posted by Lenslinger at 10:54 PM

Agreed. I ALWAYS thought more highly of reporters who either carried my tripod or light kit for me when walking from news chariot to talking head.

The pants are baseball pants. I changed into them in the live truck immediately prior to my live shot so I could jet to the ballfield at 6:02pm and play with my 35-and-up team. The footwear is my alternative to driving whilst wearing cleats.

As to the point of your post -- it's too bad you need to actually say what you said.

I rarely let a reporter carry the sticks. They can sometimes be messy. But I always appreciate the offer. It says we're a team.

Back when I was a hairdo, I always carried the tripod. Back in that day of TK76 cameras and thos gawdawful albatross VTRs we had to lug around. Our team was the photog and me. He took camera and VTR, I grabbed everything else: two way radio, tripod, mic, cable, notebook, microcassette recorder and of course my brush and mirror (just kidding about those.) I never expected my photog to go anywhere I wouldn't go, even if it meant climbing the side of a mountain in wingtips to get as close as we could to the site of a plane crash.