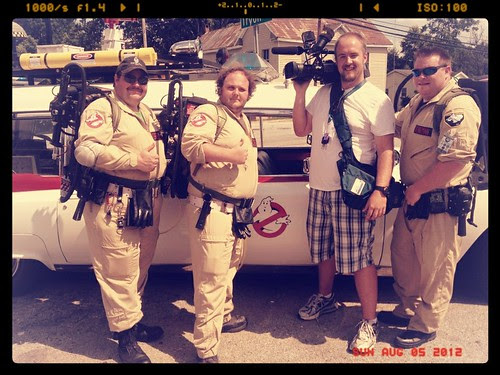 From the addled mind of David Arquette, a movie so stupid it nuked an entire genre....

(Rated R) After losing their jobs as janitors at the urinal cake outlet, three bumbling cinephiles team up to fight crime and confuse females along the sun-bleached streets of Myrtle Beach. Working as third rate celebrity imposters, the tubby trio befriend a young TV news shooter - who can't be convinced they're NOT the real Ghostbusters. Hilarity ensues until the four stumble into the den of a local meth lab kingpin, who mistakes their constant use of movie quotes as some kind of DEA doublespeak. Certain the sweaty strangers are the first wave of an anti-drug task force, the kingpin (a heavily moustachioed Howie Mandel) resorts to sorcery, summoning an underworld demon so cheaply rendered that critics later compared it to "a confused poodle retching on an Etch a Sketch".

Shot with cameras purloined from The Lenslinger Institute, KeyMasters Three: The Reckoning ("K3TR" to its half dozen fan-boys) languished in the vault for years as producers tried to distance themselves from this seriously skeevy vehicle. When eventually dumped to the dollar theater college circuit, the movie sparked outrage among indie film critics for its unintentional mimicking of shitty art-house production techniques. Sliced together by editors thought to be hard at work on the Sling Blade reboot, Keymasters Three signaled the the end of the self-referential gross-out bromantic comedy paranormal escape caper flick. Thank. God. Soon after its release, fans of the original Ghostbusters picketed Arquette's offices for dragging the Ivan Reitman classic into a film so piss poor and derivative that not even Ray Parker, Jr. wanted his name on the soundtrack.

You have to admit, that song really sucked.

Posted by Lenslinger at 9:56 PM