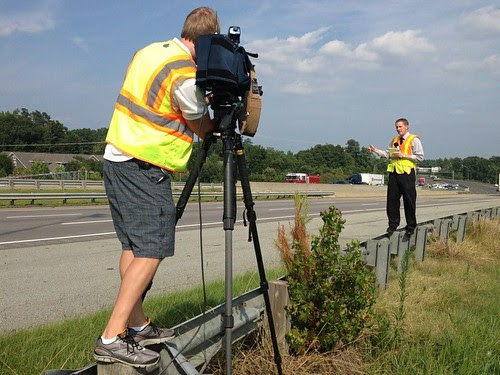 Congratulations! Today is your day! You're the photog on call! You’re off and away...

You have brains in your head and feet in your shoes. We only need six minutes of news! You’ve got gear in the rear and slots in both shows. But WE’LL be the ones who decide where you go!

There’s goo on the highway. And poo at the zoo. Stop by the station and grab a hair-do! Lex will be waiting. Rex will be too. Just don’t take Larry. That dude’s a muh-ROON! Now get off the horn and get here real soon. You’re late for a meeting! We need a new promo and a phoner at noon!

The scanner just burped! It horkled and hacked! We’re gonna need you two to come back! Pick up a live truck! Head straight out of town! An unpleasant something has just fallen down! It jumped from its perch with a couple of jolts. We’ll get the sidebar. You do nuts and bolts!

You can’t lag behind! But please do not speed! There’s no time for lunch! You’re now THE LEAD! Producers are juicing! A manager stammered! I’m pretty sure, our sports guy is hammered! But that’s not important! In times like these. Hey, make sure you feed back some kind of tease!

We know you’re not there yet! And busy as hell. But we need to know just HOW this thing fell? Did it wiggle in space? And fall on its face? Did something else push it? Did it just take a dive? Was it feeling depressed? All out of jive? Let us know when you find out. We’ll do it LIVE!

You’ll round off the bottom. In a box off the top! We’ll come back after weather. And probably not stop! We’re still in the book. So try not to flop! Now put down that phone and know you’re the best. And whatever you do, wear that damn vest! Tweet when you get there. We’ll flesh out the rest!

You’ll come to a place where the streets are not marked. We don’t really give a damn where you parked. Just get on that guardrail. The countdown’s begun. Fire up the camera. Set it on STUN. There’s no time to focus. You’re up on the bird. Stand by for grandeur…

Let’s polish this turd.
Posted by Lenslinger at 10:04 PM

What's next? Green Eggs and Cam?

O.M.G.! Dude, THAT was freakin' awesome!