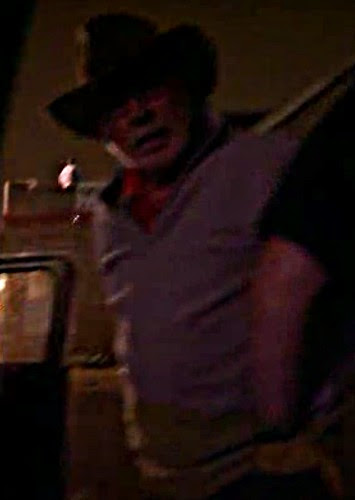 Since my only visit there was as a drunken sailor, I have fond if fuzzy memories of Milwaukee. Which is why it's such a buzz kill to see a member of that fine city's police force acting like an utter choad. Hmm? Well, what else would you call a cop who stopped staring at a house fire just long enough to hassle the oldest photog he could find? Sixty-eight year old Clint Fillinger was shooting footage of said fire from behind the police tape when a sergeant (who should know better) suddenly insists the accredited news photog back up. All the way up. Fillinger does, but as he's shooed away from an area where the public is allowed to gather, the veteran of forty-five years on the street doth protest...

"Don't give me that bullshit!" he snaps after the cop tells him moving back is for his own safety. This apparently was more than the sergeant could bear, for a few seconds later he sets aside his concern for the sexagenarian and pushes him to the ground. Fillinger is soon in cuffs, all because he spoke up when a confused constable decided the Bill of Rights only applies to people without TV cameras. Oh well, at least local residents were able to sleep better that night, knowing that Sergeant Safety rid their streets of this journalistic scourge. I guess that's one less house fire the people of Milwaukee will have to bothered with.

All sarcasm aside, this case is just the latest in a series of disturbing encounters between cops and photogs. Seems every week someone with a badge makes a rash judgment call that results in an awkward YouTube clip and new footage of their chief trying to explain why they put some camera-guy in a headlock. Why is that? Have the laws of our land grown too numerous to manage? As a news shooter I'm expected to recall every major intersection within three counties, any and all accepted light temperatures and enough greasy spoon locations to choke a mortal man. Is it too much to ask the police to remember what it is that gives the authority to arrest people? Doesn't seem like too much to ask...

Posted by Lenslinger at 9:44 PM

I believe that this is traceable back to the police union..the FOP. They are on a power trip and Ive been told the word came down from within to "get the press in line" through harrassment and intimidation, across the nation.
The Firefighters union, did the same back in the 70s when they decided that America needed less volunteers and more highly paid firefighters and actually had strategy sessions on how to drive volunteer ffs away, causing local VFDs to fail, and local goverments to have to hire people to do it, who of course immediately joined the union.

My gut feeling watching the chief's arrogant interview is one of the outlets in Milwaukee did a story on something the PD didn't like and they are retaliating by using Fillinger as a pawn.

I hope Fillinger and his station sues the Milwaukee PD...and not just agreeing to an out-of-court settlement that the city liability insurance pays out on.

They need to hit the city with a civil rights lawsuit.

'They shoulda let his camera carrying ass melt', yes indeed erpd527. Some interesting comments over at policeone.com. I hope FOX6 remember this incident the next time the PD wants to cozy up to the press for some PR exercise.

Milwaukee TV crews, especially TV6, have been on the MPD hitlist for years, beginning with an expose of the department's corruption in the 70's.

Fillinger, one of the good guys, as I recall, caught and videoed some of the boys in blue cooping off snoozing behind the hangars at Timmerman Field.

Needless to say, they know Clint, and he's on their list.

He's one of the good guy, a gentleman, and a survivor.

Did you know that you can earn dollars by locking special sections of your blog / website?
All you need to do is to open an account on Mgcash and use their Content Locking plug-in.