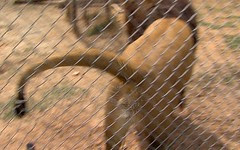 Just when I thought I'd seen it all, a steaming stream of lion piss clouds my vision. Stick with me here... It was a gorgeous afternoon in central North Carolina, which is a good thing since by the time reporter Brandon Jones and I pulled into an undisclosed compound deep within the Piedmont, I'd already zapped a battery in the name of news. Still, none of that mattered to Brandon or my bosses. They just wanted us to bag a quick feature story while no one's looking. Mission Accepted. Not that I had a lot of choice. When you wander through life with a camera on your shoulder, people tend to tell you where to point it. That's cool. I consider myself a closer. Come up with something you'd like to see documented and I'll follow it into the tall grass and teethe on it 'til it bleeds. Today, however, another apex predator would call his shot and it would send me scampering away, bruised pride and spotted spectacles in hand.

Ya know, I've put up with many a peril while standing under glass. Rogue waves, runaway trucks, extended city council meetings - I've dodged them all. Animals, too! Once upon a time I was a regular visitor to the North Carolina Zoo, profiling everything from cuddly puffins to dozing polar bears to the heftiest of elephants. I once even fed ostriches from the back of a pick-up truck and never once ran over any heads in the sand. But nothing I ever eyeballed from afar down in Asheboro prepared me for the outpouring of attention I received today. Which reminds me, when a nice lady with a bucket of raw meat says, "Watch out for that one. He'll spray ya!", don't think for a moment she's flattering you with small talk. She ain't - and I got the YouTube clip to prove it. So yeah, the lion keeper warned me - right before she suggested I cozy up to the fence for a closer shot. That's the kind of idea a guy like me can't resist. After two decades of camera management, I got "Zoom with you feet" tattooed on my soul. 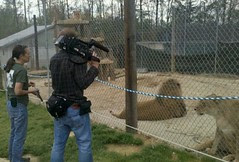 So when Bucket Lady ushered me up to the edge of that big cat enclosure, I went willingly. How else you gonna get the kind of shot people expect from a fancycam? Besides, if I wanted to stay warm and dry all the time, I'd sell stereos or insurance or crack. I damn sure wouldn't be pushin' glass where it don't belong. As it was, I felt pretty safe there before the fence, so much that my mind began to drift. That's when it happened. Acting upon either deep seeded instinct or a hidden hand gesture from my host, that feline in question cocked his arse in my direction and let loose with a burst of urine that would put a drunk sailor to shame. I caught sight of the impending plume half a second before it showered my camera, my glasses, my face. Suddenly I was moving, vaguely aware that A) those weren't beads of sweat hanging off my nose, B) the camera caught it all and C) I just might have something to blog about tonight. And while it's not the kind of thing I'd stand in line to experience again, I knew immediately it was one of those encounters I'd enjoy living down forever.

But don't take my word for it. Witness the pissing for yourself.

Now if you'll excuse me, I have to go shower. Again.
Posted by Lenslinger at 8:59 PM

I can't stop laughing!
"Oh, you're fine it happens to all of us."

L'eau de Lion- Wonder what reaction you got from your pets.

Ahhhh, poor you. And poor me too because I can't stop laughing and my side hurts. BB

So this was an off-exhibit enclosure? Now you've experienced some of what it's like to be a zoo keeper!

I was just telling a friend my story of a close call with a "pissed" off lion last week. I have never seen so much fluid come horizontally out of any living creature as the day a lion tried to mark me .... luckily she missed. I am now very careful around big cats.