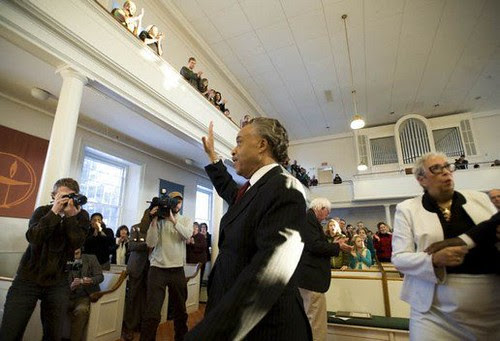 For every celebrity you meet in this business, you buzz a dozen more. Just ask Kyle DuBreuil. The Burlington, Vermont news shooter recently swooped in on Al Sharpton, a semi-intimate encounter that didn’t happen by accident.

When I saw he was exiting I ran up the aisle on the right side of the church to get a close up of him shaking hands with the hosts of the event. This photo was taken maybe only a second after I had shouldered my camera.

Now, I’ve never side-stepped around the good Rev’rend, but I’ve danced with his partner a time or ten. It’s that tenuous connection that, I’m convinced, holds the universe together. It certainly makes the world feel a lot smaller. Then again, maybe I’ve just been locked in the scrum too long, racing crosstown rivals to fleeting sweet spots, all for a lasting glance at the dignitary of the day. At times, it can feel quite silly. But when you’re poorly paid to waltz alongside the rich and infamous, you rarely stop to name-drop. Sure, you work phrases like “Hey, remember that time I chased Nikki Sixx through an underground parking garage!” into polite conservation, or blurt out “Bill Clinton smells of elderberries!” during fast-food orders, but eventually you learn to look past the marquee.

By treating the fleeting encounters with VIP’s as just another day-shift, you’ll not only become easier to be around, but you’ll grow exponentially as a PHO-tog. That windbag who shows up at every school board meeting to rail against segregation in the lunch room’s chocolate milk cooler? He deserves every bit of focus you’d lay on Miss Hawaiian Tropic, should you choose to point a camera his way. And the homeless man you’re about to turn into an internet sensation - isn’t he entitled to the same crisp, clean audio you’d insist upon should Bono bum-rush through the local orphanage?

No, it’s not as much fun to brag about the backlight you laid on some jittery tax accountant as it to dissect ever inch of your forty second slow-dance with Janet Reno. But by approaching every assignment with the same cockpit concentration, you’ll elevate your rep, spread information across the land and not look like an utter putz just because some C-Lister entered the room. Hey that reminds me - did I ever tell you about the time I fought to the death for a clearer shot of Clay Aiken? It was a mosh-pit of galactic consequence, my friend...
Posted by Lenslinger at 9:58 AM

This picture reminded me of a couple of times I was in the presence of Mr/Rev Sharpton.

I remember him being slightly intimidating.

The one time was October 7, 2005 (says my daily calendar) when he was speaking at the NAACP NC Annual Meeting. I had to interview him on the subjet de jeur....first question...Tell me what you're going to speak about today?