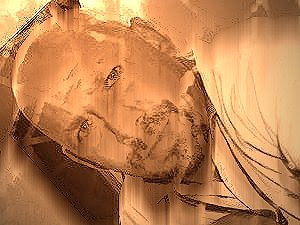 Rick Portier is many things. Subtle ain't one of 'em. Instead, the Louisiana lenslinger is known for his vicious wit, bedevilling stare and glaring lack of fructose syrup. Which makes his latest findings all the more landmark, for a guy who calls himself Turdpolisher isn't about to rent his mouth out. I knew he'd had a change of heart recently over working solo. Now it seems he's wrapped his head around it as well and - like your humble author - concluded there is indeed a future for broadcast journalists as long as they're willing to work outside their comfort zone...

There it was, big as day. A friendly comment on my Facebook status. To be sure, Alfonzo Beta meant it as a joke. Hell, the mustachioed video tape is known cut-up in the photog world, but he hit the conflict I've been feeling right on the head.

Ya see, when ABC sent lots of sore shoulders (and stackers) packing last month, it caused lots of other guys with a permanent half-wink to reconsider their lot in this business. Sure, we all saw the change on the horizon. In true photog fashion, we bitched and moaned, and did little to stem the tide of change, but the bean-counters and their new BFF, Satan Rosenblum, would not be deterred. The dawn of the new age in journalism is on us, and last week I -- gasp -- crossed over to the dark side.

Actually, it was more like three weeks ago. It started with a lot of soul searching. Okay, it started with a six-pack of Bud Light. But however I sliced it, there was no denying the fact that in the evolving landscape of this leaner business we all love to complain about, a talented photog can be king. The only thing stopping us is us.

Think about it. Who logically can make the seamless switch to one of Rosey's minions, and your penny-pinching Adult-in-the-Room's favorite, a fresh face from the halls of academia who's studied all about prepositional phrases, double negatives, and polished their telegenic grin, or a unshaven, scruffy-haired shooter who's learned the hard way when to ask the tough question and when to blend into the background? Sure, said bobble-head might look better doing it, but when the pictures from the point-and-shoot come back blue, out of focus, and over exposed, there ain't much that Avid can do to improve it.

Now if the same an experienced photog goes out, shoots the story, asks the questions, and can -- gasp again -- even write it as well or better than the starry-eyed intern, who's more valuable?

And who can make the transition to a one-stop-shop for all the Adult-in-the-Room's needs? The easy answer is the experienced photog. Simply because we already got two-and-a-half of the three parts to storytelling down cold. Any photog worth his salt is gonna bring back better pictures than a reporter pressed into shooter duty. Any shooter around long enough to develop his hundred-yard stare understands storytelling and all the tools at his disposal, and they already have an idea of how to write. Hell, I'd even argue that you can't shoot a story without being able to write it.

So we should be, hands-down the logical choice when it comes to transitioning the newsroom to the new, sleeker model. But as everybody with an electronic lump on their shoulder knows, newsrooms are anything but logical. Bean-counters would rather hand a pretty face a point-and-shoot babycam that Uncle Fred used to shoot his son's wedding than foist a photog on their precious viewers. So I decided it was time to move myself one step up the food chain. I've been doing my best Lenslinger for three weeks now. Sure, I'd rather it be nat packs for the B-block, but I've written a couple for the pretty boys to voice and made it into the A-block a time or two.

Last week when the face was late, my lack of vocal talent was pressed into service. It still ain't what I'd prefer to do, but I've got a feeling that as the business gets leaner, we'll all be doing whatever we gotta do to stay on top. In the land of the bean-counters, the guy with the most to offer usually keeps his job. Build a life raft with the talents you have. Where else are the suits gonna find a camera monkey that can shoot, edit, run every live truck, run the satellite truck, write and occasionally report the news?

Posted by Lenslinger at 9:14 PM

he did well. If he works real hard he may get to do the pre roll too!