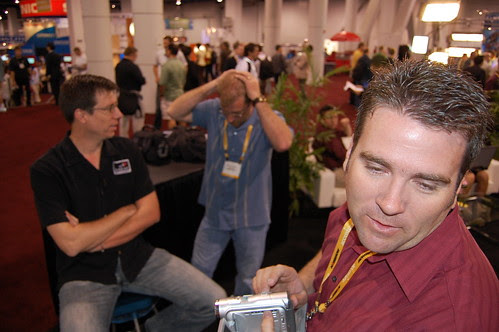 Reticent as I am to mention it before booking passage, it's looking pretty official: Team Slinger WILL be attending NAB. That's the National Association of Broadcasters, a shadowy cabal that does little more than stage the world's largest Electronic Media Show every year in that glittering scab in the desert known as Las Vegas. Twice now Weaver and I have traveled there to take in the toys, shoot a few goofy videos and suck up as much free booze as strangers will foist upon us (that's me in the middle there, trying to shake off a hangover in the making long enough to finish taping). But we don't span the continent just to get hammered. There's work to do! What with fending off vendors, gathering enough schwag to choke a sales team and rendezvousing with certain readers, there's barely enough time for a contemplative stroll at the end of the day - let alone trying to rid Vegas of every drop of Maker's Mark.

But it's not the gadgets and ass-hats that bring us back every couple of years. It's the B-Roll Bash. A sausage party if there ever was one, this yearly summit attracts TV news photogs from across the country - all hoping to get a glimpse of the always tall Kevin Johnson, founder of b-roll.net - the highly influential message board that served as the Viewfinder BLUES proving ground. Long before I ever began to blog, I was honing my prose over at Kev's treasured website. For that I'm eternally grateful and if crashing his party every couple of years is the least I can do, well who better than a news photog to do the least that he can do? Don't answer that; just know that in a little more than a month from now I'll be breaking out my finest cabanawear for a surgical strike on Sin City. If that's the kind of thing that deploys your tripod, join us!

Already Rick 'the artist formerly known as Turdpolisher' Portier has pledged his attendance, Amanda Emily is setting aside her archives long enough to visit and we're still hoping that Tiger Woods will wing in one evening for a game of Pin the Blame on the Bimbo. Okay, so that guy's something of a tool - but with the year he's had I don't expect he'll be too eager to hang out with a bunch of sleazy media types, anyway. YOU, however, would be Perfect! Drop me a line if you're in the area come April 12th. I'll be sure to clear my calendar long enough to accept any chips, tips or gratuities. Just be careful, 'cause as we all know... What happens in Vegas will be heavily blogged about. See ya there!
Posted by Lenslinger at 11:02 PM

A tiny bit of those archives may make it to the b-roll party if I'm sober enough from shooting a wedding mere hours from my plane departing Biloxi to remember to pack 'em.

seems you and the missus have been conspiring again. guess that means i'm going to vegas. wonder if the benefactor will show up again this year, his company credit card in-tow.

ready for another trip up the needle?

Amanda, register for and attend the b-roll bash. It's the whole reason for the trip.

Rick, don't blame me; you have a helluva lady there. With every correspondence, I'm more impressed. She got a sister?

Already did Stew. Figure I might as well show up since I fix the site every time it gets visited by hackers and Kev gets in way over his head.

sure wifey's got a sister. but let's not go there. hanging out with you once every two years is about all i can handle.

you'll have to stop by the club if you wanna find aunt helen.