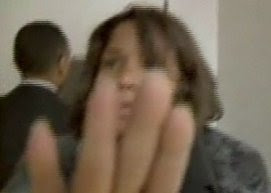 While it doesn’t warrant a full-on Schmuck Alert, the recent collision between reporter Wendy Saltzman, Dekalb County CEO Burrel Ellis and his rather frazzled Public Information Officer was a gret big exercise in AWK-Werd! Seems the elected official didn’t want to address Saltzman’s ‘tough questions', so she showed up at a meeting and executed a near-perfect ambush: blocking his egress, demanding answers and keeping her cool. The result was an awkward waltz in which the intrepid reporter got no new answers, yet exactly what she wanted. Depending on which side of the lens you call home, her performance was the very definition of gauche or Democracy in Action. Me, I’m just glad I didn’t have to shoot it. Earning my stripes at the Dawn of COPS left me well equipped to storm the gates, but ever since William Shatner stopped hosting Rescue: 911, I’ve felt the need to ratchet my glass past happenstance less and less. Besides, if I wanted to be accosted by a woman with a scarf, I’d rush whatever bunker Stephen Tyler is hiding in and take my chances. Until then, watch my back would ya? That PR lady’s got a broach and she’s not afraid to use it!

That was fun! thanks.

Amazing that she was able to shoot AND confront someone, all at the same time!? Kinda like a gun killing someone or a car causing an accident. Amazing!