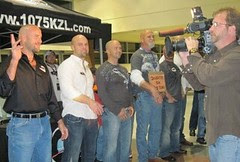 Ever have that dream where you're surrounded by giddy bald men all vying for your attention? Me neither, but with my job it's hardly necessary. In fact, that's the very scenario I stumbled into the other night while killing time before the Daughtry concert. Hours earlier, Shannon Smith and I huddled with The Bald One himself in the bowels of the Greensboro Coliseum as he and his band of buddies played grab-ass before the show. Last time they played the Gate City, they were opening for Bon Jovi. This time, Jovi was nowhere to be seen, but Chris Daughtry and his eponymous combo seem to have taken a few life lessons from that New Jersey juggernaut. Of course there's the music: a muscular brand of pop metal with enough soaring choruses to keep the housewives hummin'. But there's also the whole backstage vibe. You won't find any shivering junkies roaming the halls. You WILL find a handsome tribe of aloof musicians; all registered bad boys, mind you - but none too grubby to not drag back to the double-wide (should you ladies get the chance). But I digress. 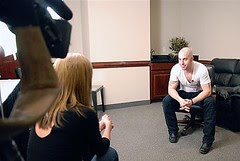 The less than pivotal role I played in Chris Daughtry's ascension has been well documented here. Overly so, some would say. So, instead of rehashing a cocktail party favorite even I've grown tired of embellishing, let me direct you here - where I've fawned and pondered over this turbo-throated everyman at considerable length. Meanwhile, I'll say this: Chris remains the same quietly confident customer that he was when Shannon Smith and met him years ago, just days before he flew to Denver and changed his life by bowling over the American Idol judges. Since then he's sold Millions of copies of his music, traveled the world, hung out with his heroes and is now headlining his first ever global coliseum tour. And still, he throws the locals a bone. When a certain pesky news crew rung him up for a sit-down, Chris welcomed us with brawny, tattooed arms. He even took the time to show Shannon and my fancycam around the stage, ensuring we wouldn't have to fall back on that crusty Idol footage to flesh out our piece. Sure, The Suits were hoping he'd let Shannon play bass on the encore of Home, but ya can't have everything. All in all, Chris was a humble host - incredibly so for a guy with his surname inked across his shoulder blades.

Soooo, here's a deep dip of the lens to the Daughtry camp for giving us some of their time. The resulting piece was the most enjoyable thing I've edited since that whole sleeping bag fiasco of last week. As for all the new friends we made at the aforementioned lookalike contest, well, it's nothing a good restraining order won't fix.