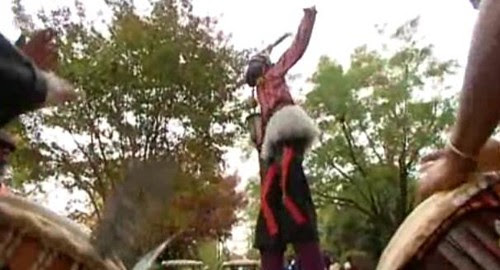 I was on the outskirts of boredom when the drums kicked in. Until then, I'd been sleepwalking through my week: chasing invisible beaver, corralling camels in small darkened rooms, even profiling weirdos at a local costume shop. None of it thrilled me. Sure, it could all pass for party fodder - but technical snafus, well-meaning newcomers and a rash of predictability had placed me squarely in a ten day coma. I get that way sometimes; so wrapped up in my own cranium that I become impervious to verve. That's where I found myself Friday as I stumbled out of a convocation I'd crashed at Winston-Salem State University. Inside some educated folk were preening in cap and gown. Outside, a clutch of scruffy drummers were standing in a loose circle, fondling their tom-toms. No sooner had I noted their position when they noticed me and my glassy-eyed friend. With a bleary precision they began hitting their skins, and I had no choice but to fall in behind them.

From there things get a little blurry. I remember the fancycam floating free, it's heft turning buoyant as it lifted me off my feet, dragging me to the source of all that rhythm. Suddenly I was surrounded as street performer and professor alike gave into the primal vibe. Moms, Dads and brand new Grads poured from the auditorium doors and the campus of WSSU took on the atmosphere of a New Orleans garden party. With a red light glowing in the corner of my tiny screen, I forgot all about shot selection. Instead I followed my instincts around the edges of the drummer's scrum before breaking off to catch a few faces. To a person they all exuded a certain groove and even this rhythm-less Father of two eventually fell into place, as for the first time in weeks I found myself shooting free, loose and unencumbered.

I just wish I hadn't tried to do 'The Robot'. Who knew they'd walk me off campus like that?
Posted by Lenslinger at 10:10 PM

Love it when it just "happens" and something completelyboringstupidandmindnumbing turns into an amazing experience!

On an unrelated note, check this out for an honorary mention schmuck alert. Apparently the guy was tired of seeing city workers sitting on their cans, so he broke out the pocketcam, and all kinds of fun ensues.