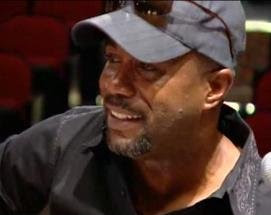 THE VOICE took me by surprise. It really shouldn't have; I'd just followed Darius Rucker into a room full of sick kids and musical instruments. But while I was fighting three other photogs for space on stage, someone handed the man most folks think of as "Hootie" a guitar. That's when the jukebox started. Except it wasn't a jukebox. It was the unassuming dude who'd just finished fishing with the kids at Victory Junction. You remember Victory Junction; that bucolic swath of Randolph County Kyle and Patty Petty turned into an oasis for chronically ill children. I'd barely made it through the gates when a certain ex-coworker whisked me away on a golf cart. "You've just about missed the fishing, but you're in time for the jam session." Nodding, I'd told my host how I'd gotten tied up at an earlier shoot, a (shoulda been) simple interview session complicated by multiple microphones. But before I could fully relate the frustration of flipping switches under duress, we pulled up outside the camp's Silver Theater and the hunt was on.

"We'll walk upon the water, We'll rise above this mess..."

Actually there wasn't much 'hunt' to it. My quarry, an affable enough chap I used to watch perform at college bars up and down the Carolinas, walked right past my golf cart. Flanked by both Pettys and trailed by camp staffers and no less than three cameramen, Darius and his family were in the middle of The Grand Tour. Smelling blood, I followed the small coterie into the theater, knowing I had some serious catch-up to play if I was gonna match Hofbauer shot for shot. Steve Hofbauer, a smiley, hulking photog from Channel 2 I see an awful lot of these days was on the same mission as I and, judging from the sweat on the back of his neck, he'd been trailing Hootie for a good ten minutes or so. That's an eternity in terms of time on tape and knowing Hof was on target put more than a little more pep in my step. Thus, I wasted no time in the lobby, plunging instead into the pitch black theater, where a stage full of kids suffering from Spinal Bifida waited with tambourines and smiles. Rucker's face lit up at the sight and as he glad handed his way on stage, Hof, Austin, George and I ALL jockeyed for the best lens position. Doubling back through heavy curtains, I managed to worm my way in front of the guest of honor as he took a seat and greeted his back-up band for the day. I turned away for a ten second shot of a particularly cute camper when Darius turned into that guy on the radio again.

Damn, that dude can sing. Three syllables into 'Hold My Hand', I was rendered agog by the soothing gravel of his voice. I'd heard it plenty of times before, most often with a beer in hand and a mullet down the back of my neck. Back in the day, Hootie and the Blowfish were mainstays on the Southeastern college bar circuit. Long before they conquered the world with Cracked Rear View, they charmed the pants off many a sorority chick with their infectious singalongs. I remember seeing them play dives in Raleigh, Greenville and Columbia, not because I was one of their backwards cap wearing fraternity fanboys, but because they were ALWAYS playing somewhere close. That, of course, was twenty years ago. These days, the Blowfish are suckin' seawater, but Rucker's reinvented himself as, of all things, a successful country artist. But none of that mattered to the kids at Victory Junction. They were glad to have a musician in their midst - even if they weren't precisely sure why four TV cameras were hanging on his every utterance. As for me, I wanted to put down my camera, lift up a lighter and sway back and forth, but with a deadline in the distance and sweat dripping down my viewfinder, I feathered the focus and tried to concentrate.

"We'll take the world together..."

After a good thirty second tight shot of Rucker's hands on the guitar neck, I contorted my body and started framing up his audience. A wide shot of the kids, many in costume - a tight shot of child struggling to keep the beat with a maraca someone handed him, a medium shot of Patty and Kyle Petty beaming. I too was beaming a little, congratulating myself for bum-rushing the photo op at the last minute and still ending up at center-square. Hof was there too, crouched down beside me with a face full of eye-cup. Shifting my weight a little , I turned back to Hootie -I mean Darius - and glanced at the reassuringly red RECORD light in the corner of my screen. That's when I noticed something tickling the back of my leg. At first I assumed it was the heavy stage curtain, but after a little mental math, I realized it was my headphones dangling low from the back of the fancycam currently digging a rut in my shoulder. Hmmm, I thought, those should be wrapped around my ears, not my ankles. Somewhere deep inside my skull, rusty synapses began to fire and with a jerk, I zeroed in on the bottom of the one inch screen taking up my view. There, in what should have been a dancing display of green and red light, my audio meter sat shrouded in dark, taunting silence.

'SWEET MOTHER OF PEARL!' I almost shouted as I began clawing at the side of my camera. I didn't have to look to see what the problem was; earlier I'd reconfigured my microphone inputs to accomodate a couple of talking heads. Forgetting to set them back, I'd hightailed it to my next shoot in sweet ignorant bliss. Only when I found myself inches away from a top selling artist as he gave an impromptu concert for a grateful audience did I notice I WAS RECORDING SILENCE! AAAAAUUUURRRRGGGHHHHH! Backing up a bit, I tilted the axe on my shoulder, flipped open a panel, found the right switch and jammed it home. Suddenly, my audio meter readout began flashing, letting me know that only now had my camera decided to record sound. Sinking deep into my viewfinder, I centered up on Hootie, Darius, whatever and stayed on him as he inspired all who heard with a song you didn't realize you knew so well. As he sang, I prayed nobody took notice of my little spasm, I prayed that Hof's leg were cramping just as badly as mine and most of all I prayed that the guy sitting across from me would please keep singing! Well, he did and by the end of the song, I had enough of it on camera (and microphone) to fuel the epic already forming in my head.

In the end, it didn't really matter - but if you've ever gained access to a pivotal moment only to shit the bed when it mattered most, you know the feeling running down my leg as I realized I'd invariably muted Hootie. Later, Hof and I interviewed Darius, who proved to be the same solid cat I remember tearing through old Zeppelin tunes at The Attic all those years ago. Though I didn't mention how close I'd come to requesting an encore earlier, we did chat about what a shame it was that The Attic - a Greenville institution we both thought would live forever - no longer stood. I probably saw him and the Blowfish there a half dozen times and while those sets were always drenched in alcohol, none were as intoxicating as the unplugged performance he delivered to those sick kids and sweaty cameramen earlier.

Once I turned on my microphone, that is.
Posted by Lenslinger at 7:24 AM

We've all been there, but none of us have been so eloquent or forthcoming about it.

"I'd heard it plenty of times before, most often with a beer in hand and a mullet down the back of my neck.

Hootie & The BLowfish are the best. I remember them at fuzzy ducks in greensboro and ziggy's in winston along with the purple gator in myrtle beach. THose were the days.

holy crap. so it happens to other guys too?

funny. i had the ipod blaring and just as i clicked on your site, hold you hand oozed into my ears. karma?

I was in New Orleans the Friday before Katrina hit, and we were shooting the taping of Wheel of Fortune, since we were the host station in Baton Rouge. They were shooting 3 shows that day, and we were doing interviews in-between. After wrapping up an interview with a local who would be in the next show, I forgot to flip the switch, only I didn't realize it until months later when it came time to edit.

At least I learned what parts are edited for time... all the parts that could help my sound.

I saw the sudden movement you made and the quick action you took to correct the problem as I thought to myself "that doesn't look good, but Stewie knows what he's doing, I'm not worried" little did I know......