Smiley in a Riot 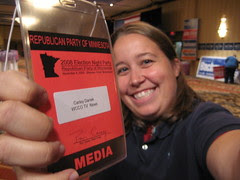 Now I ask you, is THIS a face you could lob tear gas canister at? I couldn't - even though I've never even met the Midwest news shooter know on-line as C. J. I have, however, clicked on her site for years, marveling more than once at how criminally cheerful she always seems to be... (Unbridled optimism: not a trait you see a lot of in the photog ranks.) So, you can imagine my concern when I heard she got sucked into covering a riot the other night. I myself, have never shot an official riot, but I've covered enough ECU Halloween celebrations, KKK marches and American Idol auditions to know how quickly crowds can go stupid...

Case in point: Saturday night at the University of Minnesota. Lost in the grip of something called Spring Jam, hundred of students dealt with the cancellation of a concert by pouring into the street and setting random things on fire. Thing is, a paid college tuition is no license to be an irrational asshole and before anybody could cue up Rage Against the Machine, the PO-leece arrived in riot gear. But it wasn't just the chubby blue line. News crews rolled up as well, including of course, our happy heroine. We spoke on the phone today, and while she admits dodging foam bullets for the better part of the evening, she can't decide whether it was a full-on 'riot' or merely a 'melee'.

Either way, it ain't the kind of gathering they issue press-passses for. When C. J. arrived on-scene, she found other members of the media idling on the edge. Wisely, they banded together, forming a unified force of assorted logos most news executives wouldn't understand. What followed was a nail-biter of a night in which cops flung flash-bangs, students flipped parked cars and assorted drunks hurled invectives and spittle at passing camera crews. In the end, only twelve people went to The Pokey, but hundreds more probably deserved to after destroying private and public property for no particular reason at all. Looo-sers! At least down South, if we're gonna torch the public square, we find some mindless sports victory/crushing loss to blame it on. According to C. J., this latest fracas can be blamed on a simple lack of icicles...

"It's kinda crazy what alcohol and some warm weather will do"

With perspective like that, no wonder she's so damn happy all the time.
Posted by Lenslinger at 3:26 PM

Damn!!!! That was some crazy stuff. I'm glad she's alright.