Leave it to Weaver 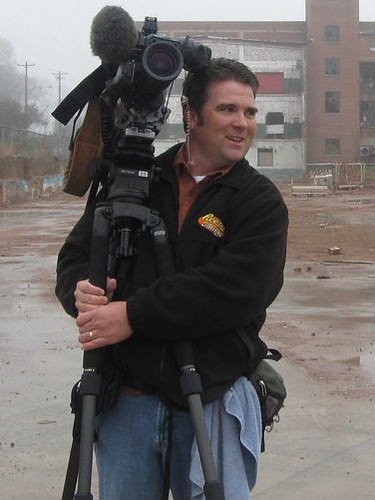 As you may have gathered, I'm not all that competitive. What can I tell ya? A lack of athleticism and knack for apathy has plagued me all my days. An early baseball coach soured me forever on team sports (thanks, Asshole!), thick lenses and a flair for narratives rarely helped me in gym class either. As I grew into the full sized wisenheimer you know today, things like collaboration eluded me too. Yes, I picked a competitive field, but I'm most effective when simply left the eff alone. Throw in a frontal lobe stuck on auto-reflect and you have a couple of reasons why I'm not the guy to get jazzed over brackets and such. That said, there is one guy who keeps me in the game and you're looking at, well, just below him. Chris Weaver is a hard guy to keep up with. He shoots, writes, slices, blogs, vlogs and Twitters. If we'd let him slap a few more logos on his news unit and crash a NASCAR race, he'd probably do that too.

We're friends, fellow web geeks and in many ways, polar opposites. It wasn't always that way, of course. In fact, when I first met Weaver, the internet was barely a glimmer in Al Gore's eye. What did exist of it was clumsily called the Information Superhighway: a term I bandied about on-air often as a one-man-band. When I wasn't mangling scientific terms, I was riding shotgun with over-caffeinated cops and mastering other broadcast cliches. On occasion my bosses would send me back to my hometown of Goldsboro for a scintillating press event at Seymour Johnson Air Force Base and that is where I first laid eyes on Weaver. He was a former pizza delivery guy with a serious jones for news. I was a chain-smoking chump who already thought he'd seen it all. Separately, we made the kind of television found in small markets everywhere. Together, we made polite conversation. Little did I know back then, I'd be sharing an orbit with this astronaut-wannabe well into my forties.

But that's exactly where I find myself today. Quite by accident, we both landed at El Ocho more than decade ago. I dare say we're both the better for it. Sure, Weaver likes to collaborate with all kinds of talent and I tried to get all but one seat in my news unit removed and yes, his love for scanners is outmatched only by my disdain for being interrupted -- but we're really cut from the very same cloth! See, my defensive cynicism is just his unbridled enthusiasm turned inside out. We're kinda like twins ripped from the womb, reared separately, then reunited askew. We often reach the same conclusion, for very different reasons. I do know that if alien spaceships ever darkened the Piedmont's skies, there's no other photog I'd want doing the 'nuts and bolts' than The Mighty Weave. Sure, I'd be tempted to point ole Zartron's laser at Weaver's skull so I could see just where all that happy came from, but I'd never act on it.

Our Mamas live way to close to each other for THAT.
Posted by Lenslinger at 12:06 AM