Pins by the Tens 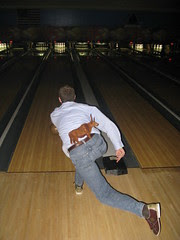 Okay, so a few of us groused when Eric White said what he wanted Midnight Bowling to be the theme of his going-away party. “Midnight Bowling? Was the arcade at Putt-Putt not available? I hear they got a righteous air hockey table at the Chuck E. Cheese. Or how about the local Karaoke b---” Just then I remembered a story Whitey told me in Unit four one time - right after he high-fived me over the turkey sandwich he’d just unpacked. Okay so I don’t remember the story at all, but it involved Our Hero belting out a show-tune from the white-hot center of some dive’s Amateur Night spotlight. Eager to avoid any encores, I scratched a bowling ball on my calendar page and pretty much forgot about it. When the Witching Hour drew nigh, I (and others) dragged our asses to upper Archdale to hurl well-worn orbs down waxy corridors. Who knew we’d stumble across an El Ocho tradition in the process?

Upon arrival, I was taken aback. The sleepy little bowling emporium I passed by daily was packed with patrons of every description. Gray-templed lane hogs with custom-made shoes, would-be gangstas holding their pants up with one as they launched their balls with the other, country folk with more enthusiasm than deodorant.

And then there were the teenagers, a highly striated crowd of every stereotype on the role: a huddle of jocks flexed for each other, stoners and Goths competed to see who could who look less impressed and one church youth group that spent most of the evening waving away cigarette smoke. Yes, it was a raucous crowd at the bowling center, all trading garbled shouts and unknowing nods as the sound of crashing pins, echoing alleys and countless Korn tunes made everything else impossible to hear.

Finally, I spotted them. Already locked in battle, the group of mostly photogs were hunched over the scoring table in much the same way they dominate an edit bay when the clock is really ticking.. Lost in hops and concentration, they barely noticed Satellite Dan and I as the Man of the Hour approached the foul line. With great flourish Whitey bent low, thrust himself forward and kicked a lanky leg out. When he released the pockmarked sphere from his grip, it shot forward on a frozen rope and upended every pin.

Upon impact, an approving roar borne of brotherhood and beer pitchers rang out, washing over the reporter in question - who, inexplicably, had a stuffed longhorn steer stuck in his britches. Spinning around, Whitey executed a victory strut Rick Flair would have envied as his posse of photogs boozily embraced him. Already, I was glad I came.

The crowd grew from there. With a newscast ending just down the road, studio crew members began to materialize and a few more lanes fell under the influence of our collective logo. Not that anyone was sporting colors. This crowd is w-a-y past that. Instead, we enjoyed relative anonymity there among the denizens of the late-night bowling scene. Only once did I catch sight of a pie-eyed slacker gazing over his suds at the purty news lady he just seen on Tee-Vee a half hour earlier.

Since most of us had been staring back at his incredibly bosomy lane-mate, the ogling seemed only fair - though rest assured had our on-air talent ever been in the slightest peril, to a photog we would have taken on all opponents with nary a broken tripod leg among us, though possibly a bowling ball would have come into play. Luckily no such fisticuffs were necessary, but the testosterone was flowing pretty thick as everyone tried to up each other’s finishing move each time the correct number of pins skittered out of sight.

A word on bowling: It being a sport, I suck at it - a fact I made painfully clear on my very first attempt. Grabbing a ball with too-small finger holes, I stumbled up to the line like the bookworm I am and hurled it awkwardly into the void. There it took a really bad bounce, leaving my lane altogether before settling into the gutter of another. Imagine my shame as it lodged there, effectively bringing two frames to a halt and causing a few of my colleagues to temporarily lose control of their bowels.

No amount of latent body English would cause the thing to budge and I was forced to leave the floor Slinking off to tell a staffer how some dork got his ball stuck, I figured my humiliation was a small price to pay if it meant my fellow photogs could know the joy of shooting beer suds out of their noses. That’s my story anyway, and I’m sticking to it.

Not that others shared my lack of acumen. In fact, I was impressed by the number of X’s that filled the scoring grid, even as the empty pitchers and crumpled plastic cups overtook the table top. Pins fell by the tens as Matt broke out his very own ball and made it pay for itself repeatedly. As for Weaver, he took to the task like a farm boy milkin’ cattle and I’m pretty sure Spillane threw out his back on that third victory dance. Others found their grooves as well and I’d be hard-pressed to name them all, though I remained sober as a judge throughout the entire proceedings.

But who needs a beer buzz when you’re surrounded by buddies twenty miles from home? Not me. No I got my kicks just watching Whitey - a goofy workhorse of a reporter whose made a permanent impression on his part of the Piedmont. We’ll miss him greatly and forever mythologize his Midnight Bowling Farewell. But that whole lane-changing gutter ball? I don't wanna talk about it...
Posted by Lenslinger at 8:30 PM

I hope we don't have to kick another reporter to the curb for that to happen again!