Big Ups to Turd Polisher (NOT pictured here) for alerting me to the Photog Equinox - that special time of Spring when Southern news shooters pack away their winter britches and break out the bermuda shorts. It ain't pretty - but there's more to Mother Nature than puppy kisses and sunsets. Hey, you put on a pair of rough-cut dungarees and run the deadline guantlet in 100 percent humidity. I'm chafing just thinking about it. What with Al Gore's endless plume of hot air, even the planet is convinced global warming does exist. Here in central North Carolina, tomorrow's high is in the low 80's and might I remind you we're still on the calendar page labeled 'March'? That sucks from where I sit, which by the way is in the floorboard of Unit 4 - where the air conditioning vents taste better. Not that I've ever barricaded myself in a station car while waiting for a crazed gunman to throw his revolver out on the sunbaked stoop. More than once, anyway. 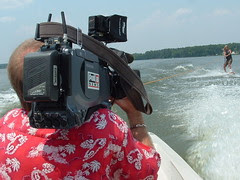 Yes, with the sweltering air soon to settle in for a long summer's nap, I suppose I'm lucky I can even wear shorts to work at all. Problem is, I rarely ever want to. Sure I still do, but given my sartorial druthers I'd pick something a bit more sophisticated than a pair of wrinkled cargo shorts and one mother of an ugly palm tree shirt. See, I never really know where I'm gonna drag my camera to from day to day. Dressing like a tourist is no problem when you're watching meth-labs burn, but sport those too-tight jean shorts and billowing hula girl print to the Republican fundraiser luncheon and you're gonna feel a little conspicuous. Sure, photogs pull it off all the time but it's hard enough to get the Governor to take you seriously when you're blessed to be without a reporter - let alone when you're dressed like Charlie Brown on a field trip. 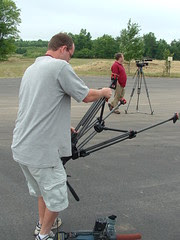 Perhaps I'm just getting old. What 40 year old wants to feel like a fourth grader picked out his outfit, anyway? Mine actually did; the ten year old in question told me just yesterday she prefers Daddy suitably bearded and sporting something tropical. When I told her I wasn't exactly Magnum PI, she cocked her head to the side and asked what kind of car was that exactly. Not knowing what to say, I followed her to the Clearance rack where this child - the one who changes outfits three times a day - picked out the loudest, most obnoxious Hawaiian shirts allowed by law. Trailing behind her, I realized I'd never make that cover of GQ, when my job involved heavy gear portage, patrol car contortions and spontaneous ghetto safaris. No sir, until I get a real job, I'm just gonna have to pretend to grin as I mix and match Garanimals. I guess there'll be plenty of time to be dignified when I'm dead. Now, what shoes can possibly tie together these pink and green plaid golf shorts with a pit-stained Hanes beefy-Tee?
Posted by Lenslinger at 8:33 PM

Thanks for not putting my knees on display in all their knobbied glory.

Dude. You get to wear SHORTS to WORK. Try yanking on a pair of pantyhose and a suit when it's 95 degrees outside. It's like being wrapped in saran wrap.
And I'd let the ten year old choose your clothes. If you're anything like my husband...and I know you are...chances are good that if you dress yourself, someone will be wondering if you are color-blind throughout the day.
Of course, you could go with the Vin Diesel look from "The Pacifier" - white t-shirt, khaki cargo pants, every single day...no, wait, never mind. Vin Diesel is the only guy who can make that work.

Spot on once again!