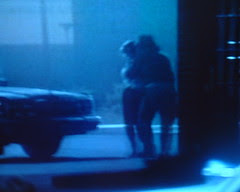 When David changed from his bartender’s uniform into camouflage and ski mask, he had no idea how many lives he was about to change...his own, the friends he was about to take hostage, and to a lesser degree, mine. I don’t claim to know what was going through his mind as he slipped out of the supply room dressed like some kind of masked G.I. Joe, but I guarantee he wasn’t thinking about SWAT cops, TV cameras and police negotiators. No, he was most likely planning on simply taking the money and running. But as he skulked around the just-closed restaurant, his sweaty palm gripping the gun handle, it was already too late. He’d set in motion a series of events that would alter the way a lot of people saw their world, including one long-haired TV geek - who more than fourteen years later, still thinks about that chilly March morning... 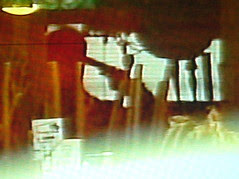 By now, long-time readers of this site are familiar with, if not sick of, The Applebee's Incident - a 1992 botched robbery turned hostage standoff that among many other things, launched my newsgathering career. Even though I wasn't exactly a practicing writer back then, I knew I'd attempt to fully describe it one day - if only to gain some badly needed perspective. Over the years I've occasionally tried to do just that, with mixed results. Accurately chronicling such a convoluted tale requires more than a tumbler of Bourbon and wishful thinking, I've found. It takes research - the kind of hard work I've yet to pony up. Instead, I pour over my notes, my timeline, my memory. Now however, I have the video. 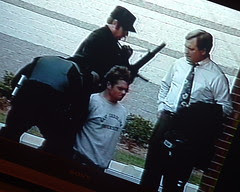 Credit Dustin Miller, a old buddy of mine whom I really wish lived closer. His recently unearthed gift of a DVD contained more than stupid bloopers and silly haircuts. It featured the Rescue 911 episode CBS crafted around the footage we shot that day. As a result, I've gleaned facts I'd forgotten and dusted off visual impressions that had grown hazy over the years. While I'm still a l-o-n-g way from completion, brother Dustin's contribution has brought new life to my abandoned manuscript. Why I'm so entranced with this distant episode isn't so easy to explain. To the veteran detective it was your typical stand-off - one in which no one got killed and the gunman ended up in cuffs. However, to the young production dork I was that day, it was a highly cinematic kick-off to a passion play I'm still living. Any writer-wannabe worth half his adverbs would clamor at the chance to tell this tale. 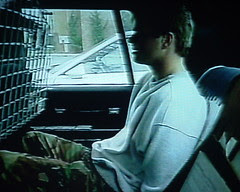 Trouble is, emotions get in the way. The young lady held hostage that morning is a friend of mine. We haven't chatted in years, but on that fateful day my heart stretched and nearly broke at the sight of her suffering - even if I was zooming in for the evening news at the time. As for the gunman David, I hold no real malice. He received a pretty stiff sentence for his stupidity that morning and no doubt regrets his actions more than anyone. I was merely a bystander, a peripheal player who did nothing more than press 'Record' and try to grasp the impossible scenes playing out in the camera's eye. I guess I should just let it go. But if I'm truly destined to document my adventures behind the lens, I can't forget it - for everything that followed still pales in comparison to the footage and feelings I gathered that fateful day.

To (eventually) be continued...
Posted by Lenslinger at 7:09 PM

Look at the bright side: At least you can name and claim your obsession. Some people go through life with obsessions they can never quite identify.

You know, he's out of jail now, holding down a job and doing quite well. I speak to his cousin occasionally. He was originally sentenced to 45 years in prison for this - and while I certainly am NOT condoning what he did or suggesting he did not deserve punishment, I always wondered why the sentence was so stiff, when worse offenders got less time after numerous busts. Maybe it was just the times - things were pretty law and order back then, but still. It's always given me pause.

I seem to always think of him initially like I did when I first met him, working with our friend and your wife. My first entry into the ....You think you knew this person Sweepstakes. I lose. Wish you lived closer too man.

Easy for me to say...but stop your ruminating and just write. I think you second guess yourself too much..

Take it from someone who does that on a daily basis.
Las Vegas Prof.