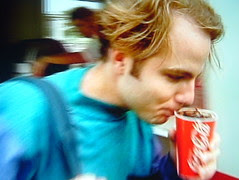 When I last saw my old buddy Dustin Miller, he pressed a freshly-burned CD in my hand and warned me not to watch it in front of the kids. I did as instructed and immediately understood why - for some of the uglier footage on that disc is hard enough to explain to rational adults, let alone wide-eyed offspring. Still, it made for stimulating if not wince-inducing television. Cobbled together from back in the day, it’s a quick-cut clip-fest of two young production dorks learning to use news cameras. I’d stick the whole thing on YouTube were I glutton for punishment, but alas, I still have some pride. So instead, I thought I’d feature a few dear friends of mine who were unfortunate enough to score a cameo. Let’s start with Dustin himself, seen here sporting more hair and more freedom than either of us are allowed to leave the house with these days. As for what’s really in that cup, let’s just call it the elixir of youth. That, or Bacardi 151. 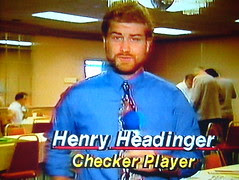 I don't know what's more ludicrous: the fact that I used to appear on camera every night around dinner time, the way my shirt just happens to match that electric blue windscreen, or the way some bleary-eyed graphic operator mislabeled me as the geriatric checker player I was profiling that day. Either way, it's a classic screen-grab - one that takes me back to the distant Saturday on which it was first recorded ... Morehead City, circa 1991 - a gaggle of senior citizens holed up in some shoreside hotel for the mother of all checkerboard show-downs. I was but a rookie reporter schlepping an outdated lens from table to table and eyeing the newfangled defibrillators on the walls. When no immediate coronaries went down, I set up my sticks and mumbled something contrived into the camera, not knowing I'd one day riff from from afar on the very idea of shooting my own stand-up. Good times... 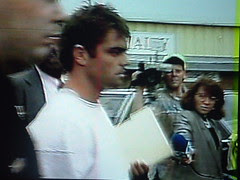 Look past the freshly arrested David Melvin and you're sure to catch a fleeting glimpse of my two earliest mentors. When cross-town competitors Andy Cordan and Carolyn Kusbit weren't eating my lunch, they were teaching me the finer points of street-level newsgathering. That's Carolyn thrusting her microphone forward, a formidable weapon in the hands of such a professional. It was she who first taught me to get it right, reminding me always that no amount of flashy video would make up for a lack of facts come broadcast time. Sadly, she's no longer in the biz, but I for one am a better journalist, thanks to her time in service. Behind her the great Andy Cordan can be seen tracking the bad guy's every move. Far less refined than Carolyn, Cordan was a whirling dervish of a one-man-band, cracking the VJ mold before Rosenblum ever got around to re-inventing it. These days, he's still quite the pioneer, and if I know Andy, still pretty ticked off. 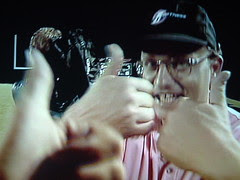 As vital to my journalistic upbringing as Carolyn and Andy were, neither could hold a dying frezzi light to this guy: Paul Vernon Dunn. Part Principled Newsman, part Southern-fried Shyster, no one taught me more about the art of the grab than ole Vern. He could fast-talk a deputy, convince The Weather Channel into buying footage sight unseen and turn a cop-shop walkdown into a handcuffed confessional before I could even get my camera powered-up. Whatsmore, he could do it all with the most beguiling disposition, eliciting the most evocative responses from those in his crosshairs in a way that brought to mind Chris Farley interviewing Paul McCartney. To the loss of my industry, he too left the fold, employing his many skills in the private sector. That stinks, as no one's more fun to hang out with by the crime tape than Mr. Dunn. No wonder Carolyn married him. 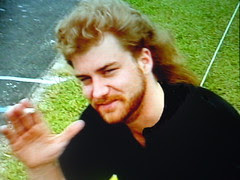 I suppose I should stop right there, but as a special gift to my half dozen loyal readers, I leave you this: Me, with a mullet. Humiliating, yes - but what stroll down memory lane is complete without at least one unfortunate haircut? None, in my book. Speaking of my book, it's still f-a-r from a finished manuscript. Truthbetold, I haven't made alot of progress on it as of late, but when I do, I'll know where to start: The Good Ole Days - that wobbly launch of my working life when cigarettes coudn't hurt you, police scanners burped all through the night and everything that went down inside a dusty viewfinder was of great and noble import. If the last ten years of lenslinging has left me bent and embittered, it's only 'cause I'm still comin' off one hell of a start to my newsgathering career. Thanks for the flashbacks, Dustin. Now, destroy the masters...please?
Posted by Lenslinger at 8:53 PM

stew- dude that last pic of you makes you look like a young Dog the Bounty Hunter......

You have to send me a copy. I got up enough nerve to get in front of my camera once for a church video I was making. After I saw myself and heard myself on tape, I vowed I would never get in front of the lens again. If we go to VJ's, I guess I will be flipping burgers again.

Bear called. Wants to know if BJ is available for one last run to Cali?

Oh, my God. I look like that female FBI whistle-blower whose name escapes me. What was with the gi-normous glasses? Oh, my, and to think I've been pining for my youth. Blecch.

Wow, that is a hell of a good mullet! Do I detect brushing while blow-drying? Mousse? Fess up, man!

Can someone hook me up with some veneers? Actually, the gap has created many proud moments. Also, if you are going to make fun of a dorky name ... at least get it right. Vernon Paul Dunn. BTW, I did not drive the news vehicle over my camera (I don't know what happened to it.) Also, I do not know why the microwave truck lost the mast when Thane and I were driving to a blazing arson (and the brown bag I hid in the bushes before the cops got there was not filled with a 12 pack and cheese sticks ... no way!)