On Tour with American Idol 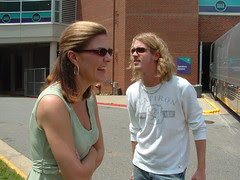 Ever since the confetti last fell on American Idol, I have been a man without a franchise; a squinting lenslinger chasing day-old headlines in the ungodly heat of a Carolina summer. Which is why I foolishly volunteered to cover Idol’s concert stop in Greensboro. Klieg lights, starlets, air conditioning - I’m in! Too bad it was on a Sunday, I thought as I scratched a note to my boss, requesting I work the show anyway.. A month or so later, I seethed and winced at the very thought of that errant impulse, whining that it was taking me away from the family on a ‘day of rest‘. Luckily, my girls staged a kayak intervention of sorts days before the concert - a splashy paddling on a nearby lake that was good for soul. By the time Shannon Smith and I cruised through a Greensboro Coliseum service entrance yesterday, I was emitting serendipity … and rockin’ out to Wolfmother.

But that soundtrack ended when I squeezed the live truck into our marked parking spot and killed the ignition. Two spaces over, two shiny black tour buses gleamed in the heat. Inside one of the buses, a tour manager peered at me through the one-way glass and dispensed his henchmen. But as I climbed out of the van and into the swelter I was unaware of my perceived intrusion. I was far too busy looking at the sweaty mob of die-hard Idol fans clamoring at a nearby security gate. When they saw me exit the live truck they went absolutely bat-shit, screaming wildly and waving scary homemade signs. Pausing a little, I gave them a little extra time to soak in my charisma. That’s when I looked around and saw the real reason for the crowd’s shrieks of adulation: Bucky Covington, ambling up behind me - with a big old grin and an even bigger bodyguard. 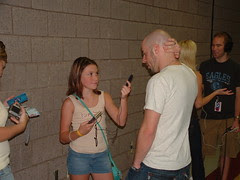 Clocking my every move, the pile of shoulders in the Security t-shirt flexed his pecks a few feet behind Bucky as the highly-likable hillbilly giggled and riffed on life on the road. Signed agreements prevent me from divulging the conversation’s particulars, but rest assured the former hometown nobodies turned fleeting rock stars are enjoying their victory lap. Wouldn’t you? Less than twelve months ago, Bucky, as well as Kellie Pickler, stood in long lines outside Greensboro Coliseum for a chance to sing for bored American Idol interns. Now they’re back, but this time they’re household names, riding high atop the traveling circus tent of the Idol juggernaut. Not bad work if you can get it.

After shooting the breeze with Bucky (and shooting some footage of him signing LOTS of autographs), Shannon and I made our way toward the Coliseum’s press entrance, where we ran into none other than the man of the evening himself, Chris Daughtry. The Greensboro auto service writer turned global rock star in training welcomed us warmly and made Shannon and me feel a little less maligned for giving up our Sundays off. Chris of course has had the biggest year of all the Carolina contestants, scorching the eardrums of millions of instant fans with his blowtorch voice and pensive stage presence. When not wowing the crowds with tepid Idol fare, he's rubbing leather-clad elbows with musicians he grew up...idolizing. To his credit, he still remembers my name… 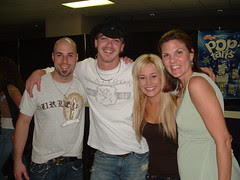 A half hour later, Shannon and I gossiped with the local radio crowd as tour handlers scurried about and spoke with strange lacks of accent. But all ancillary conversation ceased once the half dozen Idols entered the room and the microphone jousting began in earnest. Chris, Bucky and Kellie - former strangers who not long ago harbored an impossible dream shared by millions - now trade barbs and patter like seasoned veterans of Vaudeville, which if you think about, they are. How far each of them will take this disposable fame remain unseen. Chris and Kelly have both signed lucrative record deals and are working furiously on debut albums. Bucky has no deal yet, but intends to take Nashville by storm anyway, once he finishes winning over non-believers with his loopy swagger and burgeoning, down-home verve. Yes - I’m a fan, and as one, it was great to see these three go about the business of being momentarily famous without a British guy in a muscle shirt bringing down the room.
Posted by Lenslinger at 9:40 PM

Nice One lenslinger, the air con sounds real good and the fact that people want you there
Cheers
Mal
Unholyland

Woman,
You know that you're a woman,
You gotta be a woman,
I got the feeling of love,

Man I love that song.