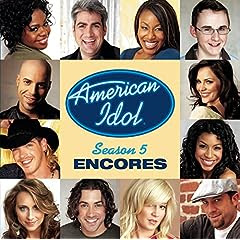 It's no secret that I entered this season of American Idol a conflicted man. Though I've never counted myself a huge fan of the show, I know a soft news juggernaut when I see it. Thus, I signed up for another year of local Idol coverage with a fair amount of reticence. 'At least local fascination with the show won't last long', I thought. I mean, no way can this year come close to Fantasia's unlikely ascent two seasons ago. Was I ever wrong. Chris Daughtry's turbo-powered pipes, Kellie Pickler's intoxicating schtick and Bucky Covington's good ole boy charm sucked in a nation of viewers and yours truly. 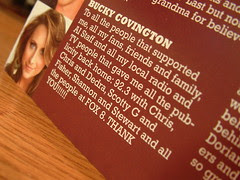 Now, at the end of a most improbable season, I find myself signing off with a few more twisted vistas seared into my frontal lobe and a few more friends scribbled in my Rolodex. And quite unexpectedly, the appreciation has been reciprocrated. In the soon to be best selling American Idol Encores CD, Bucky Covington took the trouble to thank Shannon Smith and your lowly lenslinger by name in the liner notes. Thanks, Bucky - you've once again proven yourself a (country-fried) class act and, for a little while anyway, convinced my nine year old that Daddy's pretty cool. Now if you could just do something about the cat....
Posted by Lenslinger at 11:33 AM

Both there and here on the blog sharing the backroom insight.

Fun and fresh. Better than any entertainment reports I've seen.

Thanks again for making a visit to your blog worthwhile.