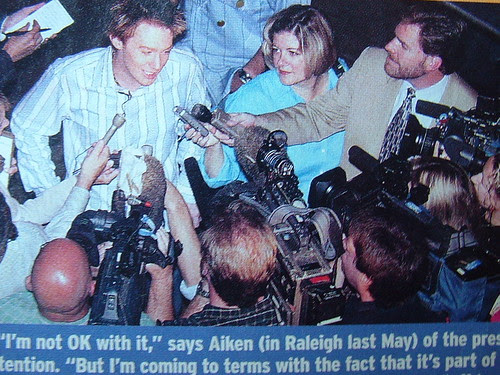 When American Idol viewers failed to place Chris Daughtry in the finals last week, they did more than crush the hopes of millions of couch-bound rockers. They put the kibosh on Chris' whirlwind hometown tour - a American Idol rite of passage reserved for the final three contestants. I was scheduled to ride point on Chris' swoop through the Piedmont, from his planned appearance on our morning news to the mini-concert scheduled for First Horizon Park. Though the 18 hour day would have been grueling, I was bummed not to be able to document Daughtry's triumphant return to central North Carolina - not just because I like the guy, but because an Idol homecoming is a media orgy of mind-boggling density.

I first learned this years ago, when my superiors hastily dispatched me to Raleigh to stalk some dork named Clay Aiken as he flittered his way through Capitol City. The ensuing camera cluster left me bruised, amused and positively agog at the power of this cheesy new show. It even landed my future bald spot in the shrieking pages of US Weekly. Read the long, frightening story behind the above shot here ... or don't. Either way, you have to admit: Chris was robbed.
Posted by Lenslinger at 7:01 AM

I think I know everybody in this picture. It's good to hear from you Stew. We need to get together some time this summer.

One happens to be Brad Ingram and the other is Nancy Lee.