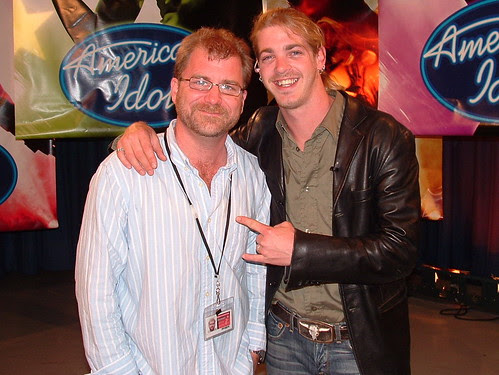 A few weeks ago I made a conscious decision to stop blogging about American Idol so much. Sure, it drove my traffic count through the roof, but I was starting to feel like the editor of Teen Beat! Thus, I've pulled back a bit and pledge to highlight Idol only when the occasion truly warrants it. Yesterday was one such occasion, as everyone's favorite lanky redneck blew through the building.

For some reason I bonded with Bucky Covington within moments of meeting him on a balcony overlooking Beverly Hills a few months ago. Something about the giggly good ole boy struck a twangy chord with me. Maybe it's because he was so relaxed. Perhaps it's because he reminds me so much of the good-hearted hicks I grew up with Downeast - polite young men who still say Yes Ma'am and No Ma'am - but aren't above a little air guitar and grab-ass whenever Big Mama ain't lookin'. Chris Daughtry may well be on his way to becoming the next American Idol, but Bucky's the one I'd pile into a rusty Camaro with for a last minute road trip to the coast.

For now though, Bucky's taking a breather, reflecting on the head-scrambling experience that his three month stint in the national zeitgeist has been. Not that he's through with singing. This summer he'll embark on the fairly lucrative American Idol tour, then the Rockingham native plans to head to Nashville where he'll try to convince Music Row he's worthy of serious development. Until then, he'll be hugging grandmothers, signing autographs and dodging stalkers as he joins the rest of us watching Idol's biggest season ramp up to the grand finale. Of course, Bucky will be back in Hollywood to witness that coronation first-hand and so, it appears, will I.

Beats gettin' stuck in the mud...
Posted by Lenslinger at 6:39 AM