Bucky Covington: On the Red Carpet

"This is more you can even hope for, just hope it keeps kickin'." 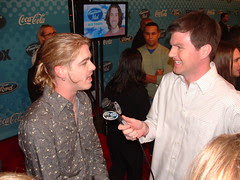 Of all the contestants at the American Idol party, it was Bucky Covington I looked forward to seeing the most. Shannon and I had bonded with the Rockingham car painter on our last trip to L.A., when he pointed out the Hollywoood sign from our posh Beverly Hills hotel balcony. Since then, we'd both been rooting for the laid back good ole boy. Why, just an hour earlier, I almost ran the rent-a-car off Rodeo Drive when Shannon's husband called to report that Bucky had made it into the Final 12, but not before Ryan Seachrest and the producers tortured him with the possibility of ejection.

Long-limbed, witty and f-a-r from urbane, Bucky reminds me of my dear childhood friend, Jon Harrison. Both men radiate an easy-going, Southern sensibility that I personally find appealing and their shared accent reminds me of my youthful days Downeast. Of course to most of America, Bucky no doubt sounds like a hick, but he's far`savvier than he appears on-screen and holds no illusions of satisfying Simon.

"I play to these," he said, pointing to the many lenses pointed at him, "'cause that's where the people are that count."

About the unlikely journey he's found himself on, the 28 year old Richmond County high school graduate is downright philosophical.

"California, I think, is known as chasin' dreams and I almost got it, ya know, I'm that close there's the door , I got my hand on the door knob just gotta get the right key to get it open."

One gets the feeling that Bucky doesn't expect to be the next American Idol, but he doesn't have to leave Hollywood a winner.

"Worryin' don't solve anything, I'm so close now if I gotta play bar to bar across America that's what I'm gonna be doin'." 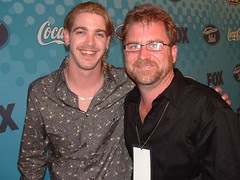 He'll have a hell of a head-start when he does but he shouldn't count himself out just yet. By making it into the Final 12, he'll have access to a new level of dream fullfillment, but I get the feeling he's not letting himself look too far into thr future. Over and over again, he thanked Shannon and I for traveling to Rockingham to interview his father, friends and twin brother Rocky. We were happy to do so and enjoyed our brief visit to Covington's Body Shop, but to Bucky the act seems to have made an indelible impression.

"To hear what ya'll have done for me back home," he said without a trace of his goofy grin, "I can't express the words to thank ya'll for it."

'Don't mention it,' I said to Bucky and Rocky over a round of after-party adult beverages, 'hanging with you guys beats the hell out of my normal gig.'
Posted by Lenslinger at 4:42 PM

I think FOX had him on recently - he was pretty good

HE DID NOT GRADUATE FROM RICHMOND COUNTY, HE GRADUATED FROM SCOTLAND HIGH SCHOOL IN LAURINBURG NORTH CAROLINA,ALONG WITH CRYSTA